Climate Fraud: The United Nations climate chief blames the Philippines devastation on climate change, ignoring the historical record that 33 of the 35 most devastating storms occurred with CO2 below current levels. 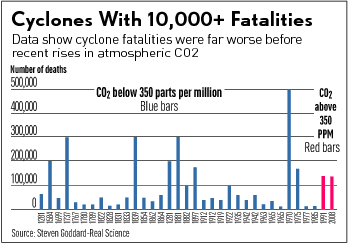 One can appreciate the genuine grief felt by an emotional Naderev "Yeb" Sano as the delegate from a Philippines devastated by Typhoon Haiyan spoke at the start of two-week talks in Warsaw where more than 190 countries will try to lay the groundwork for a new pact to fight global warming.

"We can fix this. We can stop this madness. Right now, right here," Sano told delegates in Warsaw as he pleaded for action on climate change.

He echoed words from Christiana Figueres, head of the U.N. Framework Convention on Climate Change.

"The recent very painful events of cyclone Haiyan ... have reminded the countries gathered here ... of the urgency of coming to a resolution of how all countries are going to collaborate with each other to address climate change in a timely manner," she told the conference.

Both, however, are wrong to claim that Typhoon Haiyan was caused by climate change. And their attempts to "do something" about devastating storms that have occurred throughout human history and predate the Industrial Revolution will only produce a recipe for global poverty and be as successful as King Canute who, so the legend goes, stood on the seashore and commanded the tides to recede.

Canute at least knew he had no such power and was trying to demonstrate to his courtiers the limits of a king's control over the elements. Warm-mongers like Al Gore and the U.N. climate-change scammers recognize no such limits and misdiagnose the cause of such storms and overestimate man's power to affect them.

Marc Morano at Climate Depot has reported on an analysis by climate blogger Steve Goddard of the historical record, which found that the worst cyclones or typhoons occurred before any significant addition to CO2 levels by industrialization.

There have been 35 cyclones in the last 800 years that have killed more than 10,000 people. Thirty-three occurred with CO2 below 350 PPM. The deadliest one in 1970 was blamed on global cooling at the time, says Goddard. A chart at the website Real Science shows a pattern of storms unrelated to anything mankind has done.

As Brian McNoldy, senior researcher at the University of Miami, told the website Climate Central: "While Haiyan was absolutely amazing, it's not alone. It's in an elite company of a handful of other tropical cyclones scattered across the decades and across the world."

One of Germany's leading meteorologists, Dominik Jung, slammed the global warming theorists' reaction to Typhoon Haiyan. "For many 'climate experts' this recent event is a feeding frenzy that allows them to pound the drums of 'evil climate change.' And not a single one of these ladies and gentlemen is able to show that such storms never existed over the past hundreds of years, let alone that this storm is connected to a man-made climate change," Jung wrote on his www.wetter.net/ site.

In the U.S., we heard the same climate hype after Superstorm Sandy. Yet 2013 has been one of the quietest hurricane seasons in history and the U.S. is enjoying its longest-ever period — almost eight years — without a single hurricane of Category 3 or above making landfall.

The U.S. is also enjoying its second straight below-average tornado season, and one of the calmest years for tornadoes in more than two decades, according to the Storm Prediction Center in Norman, Okla.

If Typhoon Haiyan is the product of global warming and current global temperatures, then storms like it should've been common over the last 15 years as global temperatures held steady. In fact, the greatest damage will be done by diverting more of the earth's resources to chasing the fraudulent phantom of climate change.

The planet stopped warming more than a decade ago. Meanwhile, since 2001 the CO2 level has increased by 29% of the increase prior to 2001. Carbon dioxide change has never had a significant influence on climate and never will. At http://danpangburn.blogspot.com/ see an eye-opening graph and a simple equation that, with only one external forcing, calculates an average global temperature anomaly trend since 1610 and, with 90% accuracy (correlation coefficient = 0.95), calculates measured average global temperature anomalies since 1895. See why the LIA and Global Warming both ended. CO2 change had no significant influence.