When The New York Times compares the White House to a Soviet news service, you can be sure we're living in a very different America.

New York Times photographer Doug Mills strode into Jay Carney's office Oct. 29 with a pile of pictures taken exclusively by President Obama's official photographer at events the White House press corps was forbidden to cover. "This one," Mills said, sliding one picture after another off his stack and onto the press secretary's desk. "This one, too – and this one and this one and … ."

The red-faced photographer, joined by colleagues on the White House Correspondents' Association board, finished his 10-minute presentation with a flourish that made Carney, a former Moscow correspondent for Time, wince. 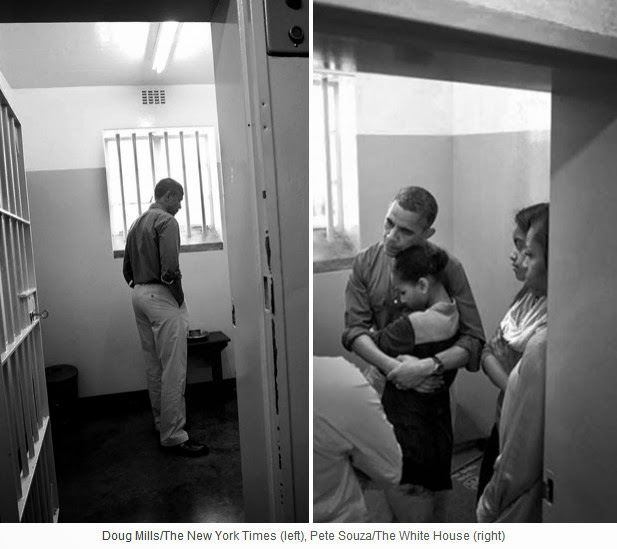 ...Media photographers were able to take photos of Obama visiting Nelson Mandela's former jail cell (see left). They were told his visit with Mandela's family in the cell would be "private." And yet photos of Obama and the family, taken by the government-funded White House photographer, were made public and went viral. This passes as "private" in the Obama White House. 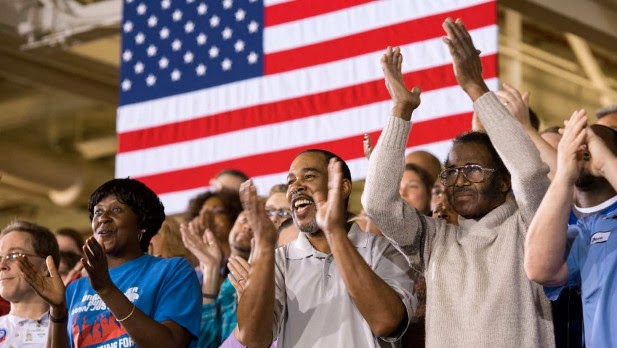 ...Official White House photographers are paid to document the president of the United States for posterity. So why do they take and distribute so many photos like this – ones with no sign of the president? Hint: The crowds are always big, happy and adoring of Obama. All on your dime. 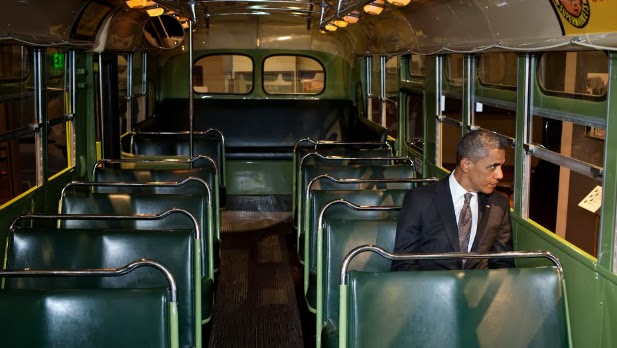 ...One of the most compelling and historic images of the Obama era, the nation's first African American president is picture here looking out of the window of the Rosa Parks bus. It's a great photograph but as a matter of public record, it's no better than beefcake photos of Russian President Vladimir Putin. Those are shot and distributed by Tass.

As National Journal's Ron Fournier observes, when George W. Bush visited the crypt believed to be the birthplace of Christ, independent photojournalists were able to freely take photos. Obama, however, "barred photographers during his visit to the exact same spot, and released [one] exclusive image... It was taken by photographer paid by taxpayers to make flattering photos of the president." 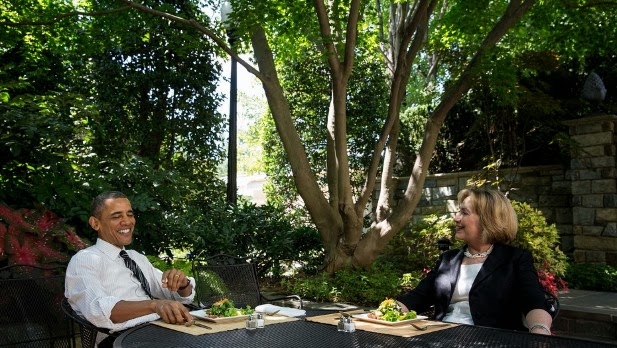 McClatchy's Anita Kumar reports that the press is growing quite upset with Obama's Soviet-style propaganda tactics.

The nation’s largest news organizations lodged a complaint Thursday against the White House for imposing unprecedented limitations on photojournalists covering President Barack Obama, which they say have harmed the public’s ability to monitor its own government.

The organizations accuse the White House of banning photojournalists from covering Obama at some events, and then later releasing its own photos and videos of the same events...

...Examples cited in the letter are Obama’s meetings with the Congressional Hispanic Caucus on July 10, former Secretary of State Hillary Clinton on July 29 and Pakistani human rights activist Malala Yousafzai on Oct. 11.

In each case, journalists weren’t allowed – and sometimes were unaware – of the event. The White House later released written summaries of the events, along with photos taken by a government photographer.

On Thursday, the presidents of the American Society of News Editors and the Associated Press Media Editors sent a letter to their members urging them to stop using handout photos and video from the White House.

The complaint was signed by 38 news organizations, including all major broadcast and cable networks, the major wire services as well as large newspapers, The New York Times and The Washington Post among them.

Tell you what, guys: read "FOREVER SIX" and then report back for further education.


UPDATE: Oh My, Obama Enrages Media With A “Screw You” Pic

Too bad someone couldn't have slammed shut that cell door. Would have saved us many problems and trillions of dollars.

This IS very simple stuff now. Plus PLEASE slow down on your posts. Folks need time to absorb the info.