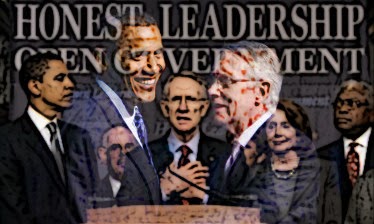 Last Thursday, Senate Majority Leader Harry Reid (D-NV) demonstrated blatant hypocrisy when he stated that he is ready to invoke the "nuclear option" to ram through President Obama's nominees. This option, also known as the Byrd Option, would use some parliamentary stunts to change fundamental Senate rules, effectively allowing a simple majority to end a filibuster instead of the current 67 vote supermajority requirement. Republicans were quick to point out that this would completely remove the rights of the minority party and stray from the intent of the Founders to operate as a republic, as opposed to a democracy. What is striking, however, is just how quickly Harry Reid has changed his tune on this procedure. Less than a decade ago, when his party was in the minority, he decried the majority party for doing exactly the same thing he wishes to do now.

Reid made the rounds on the Sunday talk shows this weekend, making the case for fundamentally altering the rules of the Senate:

Senate Majority Leader Harry Reid on Sunday signaled that the Senate remains headed toward a historic remake of its rules this week to ease the confirmation of some of President Barack Obama’s nominations.

Reid said Sunday on NBC's “Meet the Press” that he’s faced historic delay and obstruction during his time as majority leader, fighting hundreds of filibusters, including 16 of the president’s executive branch nominees. The Nevada Democrat said it’s time for that to end.

“The changes we’re making are very, very minimal. What we’re doing is saying: ‘Look American people, shouldn’t President Obama have somebody working for him that he wants?’” Reid said. “If you want to look at nominations, you know what the Founding Fathers said: ‘Simple majority.’ That’s what we need to do.”

However, Reid seems to have forgotten his basic principles of fairness that he so adamantly defended in the past:

“If there were ever an example of an abuse of power, this is it… The filibuster is the last check we have against the abuse of power in Washington.” – Harry Reid 2005

“Republicans are in power today, Democrats tomorrow. A simple majority can change anything. Mr. President, this is the way it should be. You should not be able to come in here and change willy-nilly a rule of the Senate.” – Harry Reid on Senate floor, May 23, 2005

“I just couldn’t believe that Bill Frist was going to do this. The storm had been gathering all year, and word from conservative columnists and in conservative circles was that Senator Frist of Tennessee, who was the Majority Leader, had decided to pursue a rules change that would kill the filibuster for judicial nominations. And once you opened that Pandora’s box, it was just a matter of time before a Senate leader who couldn’t get his way on something moved to eliminate the filibuster for regular business as well. And that, simply put, would be the end of the United States Senate.” – Harry Reid in his 2008 book “The Good Fight”

“As long as I am the leader, the answer’s no. I think we should just forget that. That is a black chapter in the history of the Senate. I hope we never ever get to that again because I really do believe it will ruin our country.” – Harry Reid on nuclear option, C-SPAN interview, Sept. 12, 2008

So it's a very dark chapter in the history of the Senate, unless it's your party in the majority that's being asked to work with the minority party. Harry Reid has done a lot of hypocritical, hyperpartisan, unprincipled things in his time in the Senate (see e.g. Obamacare, passage), but even by his standards, invoking the nuclear option would be a breathtakingly political move.

What goes around comes around, hopefully sooner than later.

With liberals, it is NEVER about what they say directly. It is ALWAYS about the end goal of the thing said, which is the common agenda of the moment. ANYTHING can be said, no matter how false if it advances the agenda. In fact, even the truth will be called in to testify, but only to the extent that the agenda is advanced. The instant that the truth, logic, or a truthful witness no longer serves the agenda, and it might be detrimental to the agenda, it is dismissed or even slandered.

The agenda and nothing but the agenda. If anyone thinks this is too harsh, just open your eyes to the current display of agenda-mongering at this very moment with respect to ObamaCareFail.