DEMOCRAT DEADBEATS: Illinois Now a Paltry $9 Billion Behind on Payments to Suppliers

Hey, I've got an idea! Let's give the keys to the nation's economy to a bunch of mental midgets from Chicago!

...The backlog of bills waiting to be paid in the [Illinois] comptroller’s office has grown by $3 billion since the spring, when the state was flush with tax revenue... “As the numbers grow, so too do payment delays to vendors throughout the state,” said Brad Hahn, spokesman for Comptroller Judy Baar Topinka. 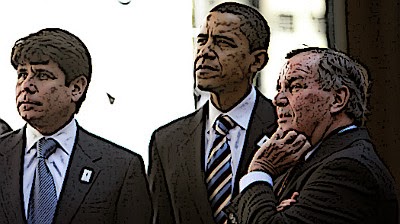 ...At the start of April, the bill backlog in Topinka’s office stood at $8.5 billion. That number included bills on hand and the office’s best estimate of bills held in state agencies.

That was, however, the high-water mark in the state’s efforts to pay bills on time. By the end of June, also the end of the state’s fiscal year, the backlog was sitting at $6.1 billion.

By Oct. 1, the backlog was up to $7.5 billion, including bills that hadn’t been turned in for payment. And as of late last week, the total was at $8.8 billion.

Hahn said the office believes the total will hit $9 billion by the end of December, exactly where Topinka predicted it would be last summer. It is the second year the backlog will sit at $9 billion at the end of the calendar year...

Hahn claims the state is "treading water", which would mean they're staying afloat.