Sy Hersh was right! So says the scion of The Atlantic's stellar lineup of conspiracy-minded commentators not named McArdle. Upon spotting the TMZ photo purporting to show JFK cavorting with a boatload of beautiful, nekkid women, Sullivan lept into action.

Now, it turns out that it took the Inter-tubes about 15 minutes to determine the print was a Photoshop-special, with all the authenticity of a Ming Dynasty boom-box. But there was no stoppin' crack pro journalist Andi Sullivan!

His book, "The Dark Side Of Camelot", was one of his best: scenes of simply staggering sexual shenanigans, rampant abuse of power, close connections with the mafia, nepotism up the whazoo. And now we have some photographic evidence - courtesy of TMZ.com - of the Kennedy lifestyle, when feminism was still at bay and powerful rich men could fill their yachts with a variety of sexual objects. Take a look at this scene from the mid-1950s. And Tiger: you were born too late: 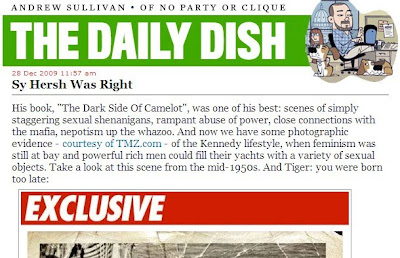 William Jacobson asks the salient question: What if Sarah Palin had done this?

Because, after all, Palin's "odd lies" represent a "cover-up" the depths of which only a man with Sullivan's pulse-pounding detective experience and vast network of like-minded pro journalists could plumb. Such as, what's up with Trig, dude?

If there's a journalistic award for self-inflicted tomdouchery, Sullivan's a lock.

at 8:51 AM
Email ThisBlogThis!Share to TwitterShare to FacebookShare to Pinterest
Labels: Democrats, MSM

Andrew Sullivan-Ivy-Inbred must make fools of themselves otherwise their lives would be without purpose.