On this morning's talk circuit, Homeland Security head Janet Napolitano achieved the rare feat known as Complete and Total Beclownment. Did you know: our security apparatus "worked like clockwork"? 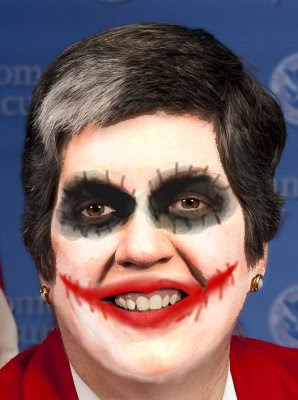 Beginning with her embrace of the impotent euphemism “man-caused disasters” to the hit job on conservatives and veterans that she was forced to apologize for, to her assertion that crossing the border illegally “isn’t a crime per se”, to her boneheaded claim that 9/11 terrorists came in through the Canadian border, Ja-No has confirmed time and again that she’s not ready for prime time.

Today, she caps off her horrible year by playing Big Pollyanna in the wake of the Flight 254. The botched bombing — foiled by a faulty detonator and brave passengers, not by homeland security bureaucrats or any preemptive measures by intel officials — shows that the in Ja-No’s fantasy world.

In reality, as ABC News confirms, only a fluke prevented the catastrophe.

Bomb experts say there was more than enough explosive to bring down the Northwest jet, which had nearly 300 people aboard, had the detonator not failed, and the nation's outdated airport screening machines may need to be upgraded... the bomb on Northwest flight 253, which was en route from Amsterdam to Detroit when suspect Umar farouk Abdulmutallab allegedly detonated it, contained more than 80 grams of PETN. The material was allegedly sewn into Abdulmutallab's underwear, and was not detected by airport security.

ABC also points out an interesting tie to the Fort Hood Jihadist mass-murderer.

Investigators believe Abdulmutallab was connected to al Qaeda by the same radical imam, American-born Anwar Awlaki, who is linked to the American Army major accused of opening fire at Fort Hood in November.

And as predicted, Napolitano also played the “lone nut” card — dismissing the Christmas Day jihadist as a single operator not part of “anything larger” despite his own testimony to the contrary.

Napolitano is a complete and utter failure. Which makes her perfect for this administration.

"... The Associated Press has learned that a second Nigerian man has been taken into custody aboard a jetliner in Detroit after locking himself in the airliner’s bathroom... A law enforcement official tells the AP that the incident took place aboard the same Northwest flight that was attacked on Christmas Day. The official spoke on condition of anonymity because the incident was ongoing."

Update II: The Underground Conservative observes: "Janet Napolitano is a solid B+. B+, of course, is the new epic FAIL."


Linked by: InstaPundit and Michelle Malkin. Thanks!

Every moooooslim (and Mexican) has a God given right to "migrate" to the United States! Everyone!

Why do people who pass a background check and pay thousands of dollars who are not muslim or not living in a country that borders us denied, while they demand everyone who belongs to a certain country or a certain faith be allowed in?

At this point, with the situation our country is in, all immigration should be reduced significantly, for the next several years.

The USA is not obligated to allow half the world to immigrate here, epecially with 10% (and expected to rise) unemployment.

An immigration time-out is needed.

Due to Janet's generous nature, my U.S. Army service was considered to be a pre qualification for terrorist.

Yet she never brought up military service when Major Hasan went terrorist ast Ft. Hood. I've wondered about that.

Janet Napolitano is a solid B+. B+, of course, is the new epic FAIL.

Next will come a pat on the back for Janet from Obama for a job well done.

Janet gets a pat on the back that propels her under the bus. Obama is good at that.

So if he was a lone bomber with no ties to anyone else why do we need to tighten security at airports?

And if the system worked perfectly how could there be a tightening of security?

I have 83 posts about JanetN here going back to 2003. Sorry no Joker graphics, but at least it's good to see others waking up to the fact that she's not that qualified.

I've complained in the past about being stopped and searched so many times trying to board an airplane, even though I'm a pudgy, white-on-white-haired grandmother (and I'm not exaggerating). And yet this Nigerian-on-a-list apparently walked aboard a plane without a second look. I think it's time people like me started making a huge stink every time we get stopped, even if we miss the flight or it gets delayed. The alternative seems to be risking our lives on flights where we're the only ones who get questioned.

This is all because we let John McCain run as "the Conservative" in 2008...

This reminds of a place I worked for a while, many years ago. We had the biggest market penetration in our industry.
Then we got a new CEO [must have been someone's nephew or something] who insisted on surrounding himself with new hires.
These new hires were all essentially worthless. We all figured he was hiring people who were so crappy he looked good by comparison.
Within two years we had lost our market dominance [I left around the end of the first year of his 'reign'] and were soon sold to a larger conglomerate.

Obama reminds me of that CEO. He's surrounded himself with screwups so he looks better. My guess is it isn't going to work out for him, either.

Weren't you the moron who claimed Obama shut down the Chrysler dealerships over politics. With no evidence to support your ludicrous claim that turned being utter nonsense.

Take your weblog and shove it up your arse. Nothing personal but your stupidity is dumbing down America.

Why are you trying to hurt our great country?

What's the matter? Your fine radical education didn't teach you to read, but did teach you good self esteem? Talk about stupid.

Read the evidence posted here and other places about Chrysler dealers. Read all of the info about this scumbag trying to bomb that plane. Anyone who has read all of the accounts so far knows that Janet screwed up. Brave Americans and a stupid terrorist are the only reason this didn't happen. But for a diehard Obamaton like yourself, you'll never see it. That's why the rest of us are here. BTW, where has your beloved President Training Wheels been this entire time? Yeah, golfing, and then later, to the gym.

You are a troll, both figuratively and literally. Now go away because you are hurting our great country.

How can you possibly take issue with Ja-No's claim that the system worked to perfection. It's right there on page 2,079 of the democrat union manual that governs homeland job security. "Trust to luck that the terrorist is dumber than the union employees responsible for detecting them. If the terrorist fails, go on strike for higher wages."