India's Prime Minister Schools Obama: First Obligation of an Elected Leader is to His Own Country

The Calcutta Telegraph offers a compelling and detailed view into the diplomatic machinations of Copenhagen. We're forced to turn to India's media outlets because state-run media in the United States continues to ignore the week's biggest stories from the climate summit (e.g., "Obama snubbed by Chinese premier at meeting", Economic Times of India). 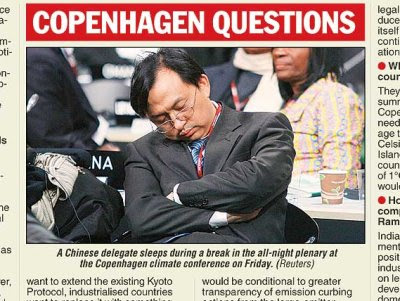 In a last ditch effort to salvage a deal, Obama walked into a room unannounced where the leaders of China, India, Brazil and South Africa were meeting.

When Obama entered the room, there was no chair for him. Obama himself was reported as saying that there weren’t any seats...

Wen also had similar views, while Lula voiced concerns over imposition of trade barriers on developing countries under the garb of environment protection... The group stuck to its stand on review of voluntary mitigation action, which it said would be an intrusion on members’ sovereignty.

In short, India's prime minister gave Obama the "Acting Presidential 101" class: leaders of democracies are accountable to the people.

One can hardly blame Democrats for forgetting this lesson; the lack of term limits and the roughly 93% reelection rate of Congressional incumbents has led to an effective oligarchy in Washington.

We are led by unaccountable, lifetime bureaucrats -- most of whom have never held a real job in their lives. That's why it feels like we're living in a Woody Allen-esque banana republic, only without the laughs.