As usual, the apologists for the Party of Weakness are attempting to spin the Northwest Airlines terror attack as feeble and impotent. Their hope is to minimize the damage on the administration's national security credentials. Too late. Said credentials long ago expired.

...there's something more significant to consider with regards to how the left perceives this terror plot. I'm reading Spencer Ackerman's post on this, "al-Qaeda’s Desperate Bid For Relevance, The Failed Plane Attack & Afghanistan." Despite his purported national security "credentials," Spencer Ackerman's woefully unserious about war and terrorism. Recall that this is the guy who called for President George W. Bush's death at the Hague, and for that reason alone his rants will garner the attention of leftist foreign policy vultures. A good example of this childishness is Ackerman's tweet from yesterday, seen here: 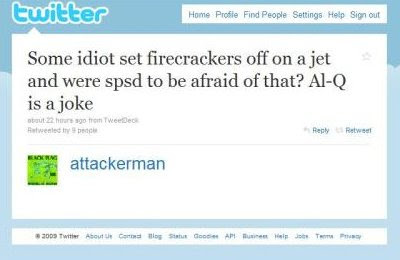 What's especially troubling about the leftists, again, is their haste to gain partisan points to downsize a forward American foreign and military policy... It would thus be pure suicide to take serious the anti-American rants of "experts" such as Spencer Ackerman and his terrorist apology-brethren in the Democratic Party. Indeed, "Attackerman" is already walking back some of his more stupid ruminations from yesterday (without much success, for that matter).

As it turns out, a walk back would not suffice. A full out retraction is needed as evidenced by the disclosure of the attack's details.

Early accounts gave the impression (to me, anyway) that Abdul Farouk Umar Abdulmutallab's attempt at terrorism may have been an amateurish one that was doomed to fail. Apparently that was not the case:

Investigators say the suspect had more than 80 grams of PETN, a compound related to nitro-glycerin used by the military. The so-called shoe bomber, Richard Reid, had only about 50 grams kin his failed attempt in 2001 to blow up a U.S.-bound jet. Yesterday's bomb failed because the detonator may have been too small or was not in "proper contact" with the explosive material, investigators told ABC News.

So this was a serious terrorist attack... This photo, presumably from a passenger's cell phone, was taken while the would-be terrorist was being led from the airplane: 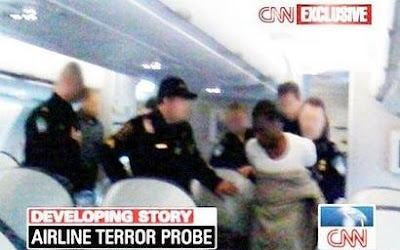 It appears that CNN blurred the faces of the law enforcement personnel involved in the arrest, presumably so that they and their families would not experience retaliation from devotees of the religion of peace. Does Barack Obama know about this?

Hopefully Paul Mirengoff is on to something when he speculates that reality has intruded on Democrats' plans to close Gitmo.

Sending detainees to Yemen has always been a ridiculous idea. The government there is weak and unstable. Yemen is a haven for al Qaeda members and is the scene of two separate insurgencies. Sending captured terrorists there is a bit like sending them to pre-surge Iraq.

But it took the attempted Christmas day bombing to drive home the point so that even Democrats can see it.

Actually, I'll believe they can see it when they demonstrate they can see it. Literally every angle Democrats have taken on the war on terror has turned out to be wrong, starting in the Carter era, continuing during the Clinton administration and perhaps now about to terminate -- once and for all -- with a nuclear Iran.

Linked by: Michelle Malkin. Thanks!
at 10:32 AM
Email ThisBlogThis!Share to TwitterShare to FacebookShare to Pinterest
Labels: Democrats, extremism, Obama, War

It's the immigration, stooopid. Allow more mooooslims into our country (and the West in general) and enjoy more jihadi attacks, as well as more mosques going up, more push for Sharia Law, more bizarre "wrappings" for women to wear, more ass-backward customs.