Is that a Hockey Stick in your graph, or you just happy to see me?

Legacy media has relentlessly marketed the incipient recovery, the end of the recession and the successful culmination of Democrat austerity measures. That last part was a joke. No better evidence of these campaigns are today's headlines highlighting "stable" housing prices:

WaPo: ...U.S. home prices were unchanged in October, according to the widely watched Standard & Poor's/Case-Shiller indexes released on Tuesday, indicating stabilization in the hard-hit housing sector... 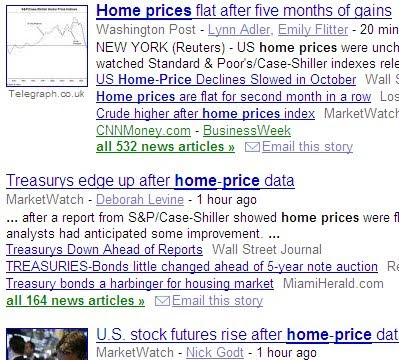 LAT: "On a month-to-month bases, we are certainly slowing down in terms of the numbers we had seen previously," said Michael D. Larson, a housing analyst with Weiss Research. But "the story remains the same: Housing is not in some huge epic rebound, but nor is it falling apart anymore -- stabilization is clear."

Of course, it takes a special kind of journalistic prowess to omit and ignore the real story of the day.

Fannie Mae reported today that the rate of serious delinquencies - at least 90 days behind - for conventional loans in its single-family guarantee business increased to 4.98% in October, up from 4.72% in September - and up from 1.89% in October 2008. 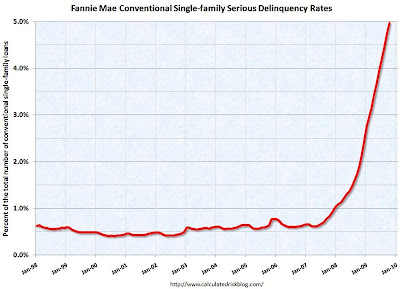 Now that right there is whatcha call a real hockey stick.
...Just more evidence of the growing delinquency problem, although it is important to note these stats do include Home Affordable Modification Program (HAMP) loans in trial modifications (and the trial modification periods have been extended again).

What this really means is that the various central-planning efforts of the big government Democrats -- from Fannie Mae, to the FHA, to HAMP -- represent a stunning series of increasingly costly failures that our children and grandchildren will have to somehow pay off. With interest.

As for analysis, you need not wait for legacy media to catch up. In short, the biggest predictor of mortgage defaults is negative equity. The more underwater you are on your loan, the better chance you have of walking away from the home. The fact that more loans (even in HAMP) are going late indicates a deflationary housing spiral is still underway. Foreclosures hurt home values; lower valuations lead to more folks underwater; which leads to more foreclosures... ad infinitum.

And despite all of these many and varied failures, legacy media looks askance while helping to sell the same big government, Politburo-style plans to nationalize one-sixth of the economy. I can't wait for the Harvard Case Study on the death of the liberal media. At this rate, it could be ready by the fall semester of 2011.

You read an article, like the one written by ElBoghdady, and wonder who thought these words should take up space in either a newspaper or on the web.
.