The Radical Racism of the Modern Left, Exhibit 4,320

Here's an original topic for an article: Jews control the White House, the world economic system and even the winner of the Vikings-Panthers game. Such an article would not be surprising if it were published on a neo-Nazi site. That it would appear as a prominent cover piece on a leftist "peace and social justice" site is noteworthy. 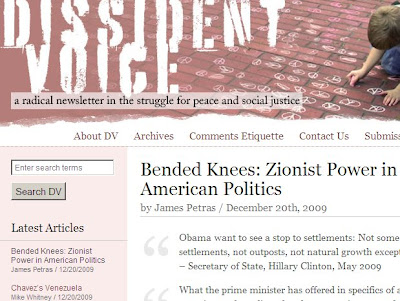 Now more than ever, the hard left ideologues who control the purse-strings of the Democrat Party are the enemies of America's civil society. Democrats must therefore be politically punished in 2010 if we are to salvage the Constitution.

at 9:09 PM
Email ThisBlogThis!Share to TwitterShare to FacebookShare to Pinterest
Labels: Democrats, extremism

This is so disturbing that people are so brainwashed to believe this crap. Liberalism is, by it's very growth, become the antithesis of belief in a G-d.

Belief in oneself, as the ultimate, has killed and oppressed more people in the last century than anyone else.

Liberalism lives among those because as they seek a higher power, they come up with only something flawed - a human being.

Liberal Jews are no different because to them, their liberalism trumps their Judaism.

Social Justice are words slithered by the serpent's tongue; it is evil in every form.

I pray Pope Benedict will see that Social Justice is evil fruit of the rotten Marxist tree and does not serve God's children righteously.