'What Would You Do?'

ABC serves a dual role in its position as 'stalwart member of the legacy media'. It enjoys: (a) torturing random citizens while (b) promoting socialized medicine. Its efforts are best exemplified by a recurring feature called 'What Would You Do?'

A recent show asks "Would You Help a Sick Stranger Get Meds?":

As more than 47 million Americans struggle without insurance and more than a third of the country not able to fill prescriptions because of the cost, ABC News wondered if anyone would come to their aid.

So, "What Would You Do?" rigged a local pharmacy in Morristown, N.J., with hidden cameras and microphones to determine if a nation divided on public health would intervene in private care to help a stranger in need.

Actors were hired to portray a very real health dilemma -- acting as customers who couldn't afford their medications...

Never mind that American taxpayers already pay for Medicaid, SCHIP, Medicare Parts-Whatever, and heaven knows what else... never mind all that! ABC is compelled to run infomercials for Reidcare!

As an aside, I thought of my own episode of "What would you do?": 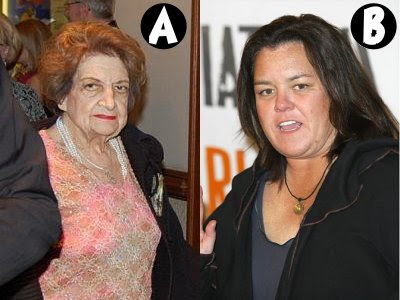 at 8:37 PM
Email ThisBlogThis!Share to TwitterShare to FacebookShare to Pinterest
Labels: Democrats, MSM

Well, given option A or B, I would take pepto bismal and immodium AD.

If you think pictures A and B constitute a Rule Five Sunday,you've got another think coming!
Heh.

rinse my eyes out with bleach.

I'd kill myself. Either way, Ill not have to do either of them.

Do I have to choose between A and B? Could you not offer at least one more? Let's say C is the option to shave my nuts with a weedeater.
I'll take C, twice a day, if necessary.

Let's see: Two of the most detestable females on the planet, intellectually and physically......with no other choice I'd have to rule out the 85-year old Helen!

Choices? What between the reincarnation of Night of The Living Dead and KSM in drag?

Pass. Time to get drunk and try to unsee what's on display here...