Here is a reprint of the Congressional Research Service's Recall of Legislators and the Removal of Members of Congress from Office (PDF). The summary reads:

Under the United States Constitution and congressional practice, Members of Congress may have their services ended prior to the normal expiration of their constitutionally established terms of office by their resignation or death, or by action of the House of Congress in which they are a Member by way of an “expulsion,” or by a finding that in accepting a subsequent public office deemed to be “incompatible” with congressional office, the Member has vacated his congressional seat. 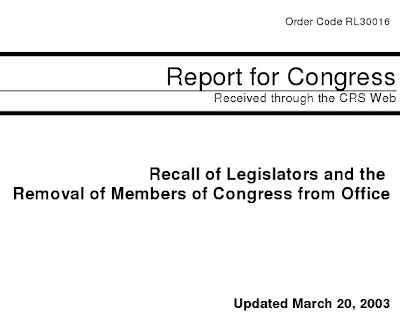 Under Article I, Section 5, clause 2, of the Constitution, a Member of Congress may be removed from office before the normal expiration of his or her constitutional term by an “expulsion” from the Senate (if a Senator) or from the House of Representatives (if a Representative) upon a formal vote on a resolution agreed to by two-thirds of the Members of the respective body present and voting. While there are no specific grounds for an expulsion expressed in the Constitution, expulsion actions in both the House and the Senate have generally concerned cases of perceived disloyalty to the United States, or the conviction of a criminal statutory offense which involved abuse of one’s official position. Each House has broad authority as to the grounds, nature, timing, and procedure for an expulsion of a Member. However, policy considerations, as opposed to questions of authority, have appeared to restrain the Senate and House in the exercise of expulsion when it might be considered as infringing on the electoral process, such as when the electorate knew of the past misconduct under consideration and still elected or re-elected the Member.

As to removal by recall, the United States Constitution does not provide for nor authorize the recall of United States officers such as Senators, Representatives, or the President or Vice President, and thus no Member of Congress has ever been recalled in the history of the United States. The recall of Members was considered during the time of the drafting of the federal Constitution in 1787, but no such provisions were included in the final version sent to the States for ratification, and the specific drafting and ratifying debates indicate an express understanding of the Framers and ratifiers that no right or power to recall a Senator or Representative from the United States Congress exists under the Constitution. Although the Supreme Court has not needed to directly address the subject of recall of Members of Congress, other Supreme Court decisions, as well as the weight of other judicial and administrative decisions, rulings and opinions, indicate that: (1) the right to remove a Member of Congress before the expiration of his or her constitutionally established term of office is one which resides exclusively in each House of Congress as established in the expulsion clause of the United States Constitution, and (2) the length and number of the terms of office for federal officials, established and agreed upon by the States in the Constitution creating that Federal Government, may not be unilaterally changed by an individual State, such as through the enactment of a recall provision or a term limitation for a United States Senator or Representative. Under Supreme Court constitutional interpretation, since individual States never had the original sovereign authority to unilaterally change the terms and conditions of service of federal officials agreed to and established in the Constitution, such a power could not be “reserved” under the 10th Amendment.

Could have told you on that one, Boss!

Kind of funny, ain't it? Under the current class of bloviating morons in DC, they walk all over the USC but they will "honor" this one.