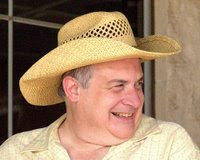 The invaluable Climate Depot alerts us to the uproarious antics of Michael Tobis, a leading apologist for the climate scam promoters (I've helpfully shortened the URL to his post -- http://tinyurl.com/ClimateScam). Tobis offers a variety of spectacularly poor arguments, each worth spotlighting for their peg-the-needle disconnectedness from reality.

Best of all, when challenged on his blog, Tobis chose to delete opposition comments -- even when politely phrased and attributed -- an apparent violation of his own policies. Then again, deletion of factual data seems to be a specialty of this crackerjack bunch. Consider the three tenents of Tobis' argument:

You'll forgive me. The fact that my paternal grandfather among other close relatives was in fact killed at a concentration camp on the basis of conspiracy theories makes it hard for me to take the matter all that lightly. I don't imagine that climate scientists are going to be rounded up and gassed anytime soon, but the reinvention of the techniques for stirring up mass paranoia would disturb me greatly even if they weren't directed, you know, at me and at some of the people I respect most in the world.

2. Did you know: The Socialism-slash-personal profit meme behind AGW is a 'Ludicrous Conspiracy Theory'?

A ludicrous theory exists that people have invented "global warming" from whole cloth in order to advance either our own personal interests (the idea mocked by the title of this blog [ed: Only In It For The Gold] or, more recently, a subversive political agenda intended to

And Tobis emphasizes one final point:

3. Did you know: the Climategate disclosures represent much ado about nothing

• frustration about too much attention to substandard scientific papers slipped into the literature by marginally qualified people with nonscientific agendas, and discussions about how to handle that
• frustration about opposition by filibuster via freedom of information requests
• a single suggestion about "deleting emails", without any context, which plausibly does not refer to deleting emails from a server (scientists are probably aware that end users cannot really do this) but rather to deleting them from a response to one of many FOIA requests
• some sloppy code and a pretty sad but perfectly typical lack of understanding of the advantages of dynamic programming languages
• a couple of fudge factors explicitly labeled as such probably used in testing, commented out
• some older data for which CRU is not the originator or primary repository is not in any known dataset at CRU
• about 985 emails and 1995 other files of no apparent interest to anyone

I had attempted to respond to these disastrously flawed statements and -- predictably -- Tobis did not allow them to appear on his site. As regular readers of this site know, I let every side of an argument post. I may asterisk out a curse word now and then, but for the most part everyone is allowed to present their arguments.

Tobis' intellectual dishonesty prevented him from releasing this comment:

...the Nazis (the National Socialist Democrats) were leftists, through and through. They used a fascist version of socialism to advance their agenda. 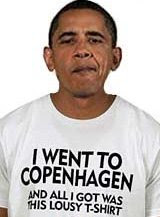 Your apologia for Climategate is quite stunning. As for the so-called conspiracy theories regarding the socialists who have sprung up around the environmental movement, perhaps you could refute the following:

* The current EPA administrator's (Lisa Jackson) explanation that the environmental movement revolves around "social justice" and redistribution of resources ("We need to ... make clear that environmentalism goes hand-in-hand with traditional civil rights and social justice issues in our community").

* Carol Browner's involvement in the world socialist movement (until her name was scrubbed from the website).

* And the long history of the misuse of science in pursuit of "environmentalism" that have inarguably resulted in the deaths of tens of millions of innocents.

Furthermore, we now have reports from Russia, New Zealand and Australia about intentional falsification and corruption of raw data sets.

And the IPCC's own members have set up companies (e.g., EcoSecurities) and various consulting arrangements to make themselves millionaires from the very reports they've created.

This process is so corrupt that even the World Rainforest Movement (not exactly a right-wing group) has called it a "fraud".

Don't be a Climategate Denier -- it's unbecoming from a man of your stature.

Tobis (predictably) refused to let that comment appear on his blog. He alluded to it in a follow-up comment using his traditional standards of minimalist accuracy:

Readers are informed that this blog is moderated for a reason. If what you say only irritates me without interesting me at all, I make no promise to post it.

Please try to be interesting, and slightly more polite than you want to be. Thanks.

One peabrain insisted that Nazis are leftwingers because they have the word "socialist" in their name, and that my confusion on this point invalidates anything else I have to say. Refutation on that point is left as an exercise for the reader.

Obviously that was nowhere close to what was said. I posted one final comment on Tobis' site:

I see you have rejected my comment and made the claim that I am a "pea-brain" for the assertion that Nazis were leftists.

Hitler said himself of Nazism:

I have learned a great deal from Marxism, as I do not hesitate to admit. The difference between them and myself is that I have really put into practice what these peddlers and penpushers have timidly begun...I had only to develop logically what Social Democracy repeatedly failed in because of its attempt to realize its evolution within the framework of democracy. National Socialism is what Marxism might have been if it could have broken its absurd and artificial ties with the democratic order.

(Hitler to Rauschning, The Voice of Destruction, pg. 186).

Not to worry, I'm sure you'll hit the delete button on this message as well.

Kind of like how the raw CRU data was dispensed with.

Did Tobis permit this comment? Of course not! He's got an agenda -- which doesn't in any way include veritas -- to pursue!

And aside from an almost uncanny ability to clog toilets, Tobis appears to be just another in a long line of talentless drones. And, yes, they are in it for the gold. That much is certain.

Update II: Ed Driscoll links -- thanks! -- and has the must-see graphic: 'To Be Fair, That’s A Lot Of Decline To Hide'


Linked by: Cold Fury. Thanks!

at 6:37 PM
Email ThisBlogThis!Share to TwitterShare to FacebookShare to Pinterest
Labels: Climate, extremism

In 2008, 78% American Jewish population voted for Jewish extermination because the illusion keeps them from seeing truth.

How many tree rings does this Tobis use for his 'consensus'...just the one also?
..or did he break down and go with two rings just to 'settle' the 'science'.

This silly SOB wouldn't know AGW if he had to shovel 4-6 inches of it off his walk.

Tobis' aka is MT, which is extremely accurate.

It is self-defeating to attempt to combat the Left in those media it controls. They maintain as a tenet of their faith that they are in sole possession of the truth, and that anyone who differs is stupid, evil, or both.

Actually the Nazis were, during a critical period of their growth (the later 20's when they were trying to go national) by large industrial corporations who wanted someone to attack the unions and communists. As Hitler went on to do. In using the word socialist and promising various benefits to ordinary germans he was following in the footsteps of that well known socialist Bismarck.

The book "Liberal Fascism" also shows how fascism and progressivism are linked. They are kindred spirits. Clearly fascism is of the left but it is amazing how leftists deny that. The book shows how it was Stalin who started the propaganda about fascism being a "far right" ideology. Yes, perhaps slightly to the right of communism.

Even if you are correct in the definition of NAZIs he won those rounds by avoiding debating his global warming points.

Last time I crossed pens with Michael T wa on another blog. And he didn't stick around to actually discuss anything serious - just long enough to throw out some insulting (and untrue) assumptions.

Jim Owen, if you'd provide a link to the conversation in question I will respond. I do occasionally leave comments on blogs I don't follow, so I may miss the responses.

I'm not hard to find, though, and unlike some people, I do change my mind on occasion.

If I said something demonstrably incorrect I would very much appreciate being informed about it, and I will apologize if it's needed.

I in fact apologize, while on the subject, for calling our host a pea-brain.

Apparently the confusion about what "right wing" means in the context of totalitarianism is common on the right wing. I'm shocked and discouraged and not a little terrified by this.

Apparently you guys have a whole alternate theory of totalitarianism where the distinction between nationalism and classism as the basic manipulative technique is lost. So it's very seriously wrong, since it takes the heat off clearly xenophobic/fascist tendencies from the likes of Glenn Beck, but it's not stupid.

Libertarianism is not fascism, nor is it right-wing in my view. It's, to coin a phrase, not evil, just wrong (tremendously impractical).

The ridiculous overemphasis on the CRU emails, though, is clearly a fascistic (scapegoating a misrepresented "other") technique. If y'all libertarians pick it up, you are buying into a fabricated conspiracy model of the world. That way lies madness.

My own belief is toward "as little government as needed, as local as possible, as market-driven as possible, but that is probably more government intervention in the market than most people nowadays think".

I also think the longer we delay responding to climate and other sustainability risks, the more likely a very long period of war and/or totalitarianism becomes.

I suppose you can pigeon-hole me if you want. There's not much I can do to stop you.

As for my initials, yeah I noticed that already.