The Delusions (and Barbarism) of the 'Reality-Based' Community

Over at 538.com, Nate Silver devotes significant attention to the faux liberal outrage erupting over the nationalization of health care. Silver analyzes the responses to 20 of his questions posed to Markos Moulitsas (Daily Kos) and Jon Walker (FireDogLake).

I'll save you the effort of reading their neural diarrhea. Suffice it to say that the "Reality-based" Community devotes thousands of words to government-run health care without mentioning: 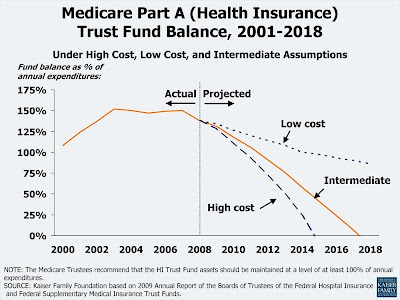 • The "dangerous" amount of national debt that we are assuming ($50,000 for each and every American by 2019 without a health care takeover);

• The exploding and extremely risky deficit;

• The impending bankruptcy of Medicare and Medicaid (the time-bomb is set to explode in less than a decade);

• Slashing $500 billion from Medicare while claiming to "improve quality";

• And the utter accounting fraud associated with booking six years of benefits against ten years of tax revenues.

Bernie Madoff is serving time for running a Ponzi scheme like this, only a 100 times smaller. Best of all, Silver is the supposed "numbers guy" for the socialist left. So he turns out to be just as intellectually honest as the rest of the Soros-funded troupe.

The numbers are real. And they are dangerous to the future of this country, according not to me, but the Congressional Budget Office.

So the "Reality-based" Community is either delusional or intent on the utter destruction of the American experiment. Choosing which is an exercise best left to the reader.

Note: Yes, this is the same Nate Silver of the Dealergate beclownment. No one tell Natey that a variety of lawsuits by dealers alleging partisan activities by the Obama administration are still wending their way through courts.

Great posting. I read Kos by chance this morning. He's just a slimeball of hatred spitting bile at his enemies. And he speaks for the Dems!

You know, am I the only one finding partisan-based political commentary boring and essentially meaningless?

How am I, or anyone for that matter, supposed to take seriously the thoughts of one who always sides with a predetermined "slant", to the point where they can use opposing political labels as epithets? As if an idea being "liberal" automatically disqualifies its legitimacy? Conservatives from a more effective era would laugh at the notion.

George HW Bush said it best (paraphrased, heavily, from a longer statement) "you must seriously consider the opposing viewpoints, agree with some of it, or no one will take your counter argument seriously".

Clearly your blog is a bright, shining indication that this sort of insight is completely dead in this era.

Congratulations to doggedly pursuing the ever-escalating polarization of modern political discourse. Someday you'll win and no one will come to a consensus on anything! Yet another attempt to reform a flawed healthcare system will be destroyed! Good job! You deserve it.

Take a walk off a long pier, mouth-breather.

Our country is being systematically looted, our children being robbed, and our governing documents being burned.

I believe in the Constitution.

Apparently, you believe in nothing at all.