Recent snowstorms have pointed out several egregious flaws in the philosophy of enviro-statism. Not only is 'global warming' a confirmed, UN-sponsored financial fraud, but the efforts to inject energy-efficiency into all quarters of the economy can often lead to unintended consequences. The results may be fatal, but that is nothing new for the green crowd. 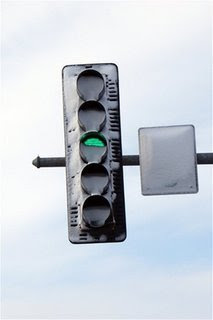 Across the country, many counties have adopted LED traffic lights as an energy efficient replacement to traditional bulbs. While accomplishing their energy saving billing superbly, the deployment had an unintended side effect. In northern states like Wisconsin, snow and ice have been building up on the new bulbs creating a road hazard. The critical factor appears to be that normal bulbs produce enough heat to melt the snow -- but the energy efficient LED bulbs, thanks to their efficiency, do not.

In Wisconsin, the winter weather has obscured the lights so badly that several accidents have occurred, leading to at least one fatality. Describes Duane Kassens, a Wisconsin driver from West Bend who was involved in one of the fender benders, "I've never had to put up with this in the past. The police officer told me the new lights weren't melting the snow. How is that safe?"

...In Illinois a driver plowed through a blocked traffic light in April, hitting 34-year-old Lisa Richter who had the right of way. She died from injuries sustained. Oswego police Detective Rob Sherwood, who was involved in the Richter case comments, "Would the accident have occurred if the lights had been clear? I would be willing to bet not."

Isn't central planning -- along the lines of the old Soviet Politburo -- wonderful?

Say, I've got an idea -- why not have our politicians run health care? I can't think of a single thing that could go wrong with that!

at 10:29 AM
Email ThisBlogThis!Share to TwitterShare to FacebookShare to Pinterest
Labels: Climate, Democrats, Energy, Gore

From a small town in Wisconsin, I can report that the money saved with these energy efficient lights is being used to pay city crews to drive around brushing the snow from these fine traffic lights.