May we have the envelope, please? Media Research Center announces its 2009 winners

The Media Research Center recently announced its prestigious 2009 winners of the Best Notable Quotables Awards. These represent "a compilation of the most outrageous and/or humorous news media quotes from 2009".

May we have the envelope, please? 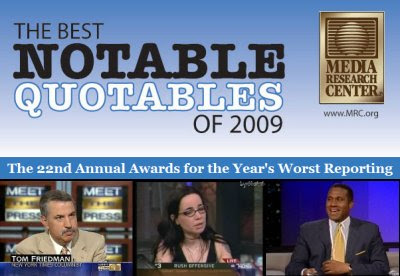 I'll give away just one of the winners:

"Mary Jo [Kopechne] wasn’t a right-wing talking point or a negative campaign slogan....We don’t know how much Kennedy was affected by her death, or what she’d have thought about arguably being a catalyst for the most successful Senate career in history....[One wonders what] Mary Jo Kopechne would have had to say about Ted’s death, and what she’d have thought of the life and career that are being (rightfully) heralded. Who knows — maybe she’d feel it was worth it.” -— Discover magazine deputy web editor Melissa Lafsky, who formerly worked on the New York Times’s Freakonomics blog, writing at the Huffington Post, August 27.

at 9:45 AM
Email ThisBlogThis!Share to TwitterShare to FacebookShare to Pinterest
Labels: Democrats, MSM, Obama

Er, yeah I think we do know what she would have thought. Mary Jo Kopechne lost her life fighting the advances of that drunk pig, so I think it's safe to assume she wouldn't feel too happy about the fact that the people of Massachusetts had so little integrity as to continue to elect the bastard one term after another, and usually by large margins at that.

If there's a hell I hope he hears her voice and sees her face in every crackling flame that licks his balls.

Her last name really is Lafsky? Entirely too appropriate.