My second prediction for 2010: It's Going To Be Bush's Fault

Dan from New York offers a prediction for the coming year and I concur.

It's hard to argue with the premise that 2009 exposed a yawning gap between Obama's worldview and the way of the world. But many conservatives mistakenly believe that the weight of reality will force the man into a course correction. That's a bad mistake committed by reasonable people who are unable to fathom the power of Obama's bred-in-the-bone ideology to withstand change and brush off the laws of cause and effect. If Republicans can't convince the American people to put a honkin' speed bump in Obama's path this coming November, he's going to drag us full speed in the same direction until 2012, come what may.

A Humpty-Dumpty View of the World

Rarely has a candidate’s entire world view been so abruptly refuted in the first year of a presidency... 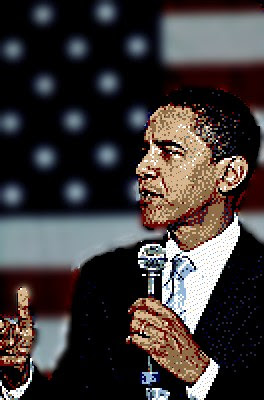 ...most of you readers remember young Barack Obama in late 2007 hitting the stump against Hillary, proclaiming to the world how his hope and change bromides would stop the Bush-Cheney nexus from destroying the planet.

Those were heady times when Guantanamo was still a gulag with its hundreds of Solzhenitsyns, not psychopaths like Khalid Sheikh Mohammeds, when we could just leave Iraq by “March 2008”, and when there would be no lobbyists, no tax cheats, no insider buy-offs and horse-trading for votes. In such a dreamy world, geniuses like Timothy Geithner don’t pocket their FICA allowances, and Tom Daschles don’t fudge on their complimentary limo services.

And then tragically Obama got elected and discovered that the real world had no relationship whatsoever to his fantasy impressions of it. In a cosmos of radical Islam, Chinese bankers, Japanese exporters, and Arab oil producers, there were no more law school profs, Rev. Wrights, or Chris Matthews and Newsweek editors to wink and nod and reassure Obama that his mellifluous but empty rhetoric allusions were at all reality-based.

...So if he seems bewildered, angry sometimes, and more at home in warm, lush Hawaii, you would be too — once you discovered that your easy fantasies and winged rhetoric of the last thirty years have no relation with the here and now...

You know what to do.

I think the little boy, playing grownup, is finding out that being president of the US may be a little harder than, say, being a community organizer.