Larwyn asks the question the media hasn't bothered to: did this barbarian use information "accidentally disclosed" by the TSA a few weeks ago to help get his makeshift bomb aboard?

This is potentially significant, due to the highly plausible double meaning of the "ceremony" as an act of jihad, as well as for jihadists' common habit of referring to an upcoming attack as a "wedding." At the very least, it would behoove authorities to ask for more details before granting a visa, and restrict the interval for which it is valid. 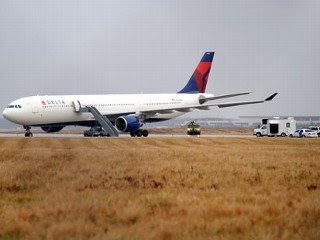 The suspect was identified as Abdul Farouk Abdulmutallab, 23, who according to federal documents is an engineering student at University College of London.

He was flying from Nigeria to the United States for a religious ceremony, according to his entry visa, which was issued June 16, 2008 and was good until June 12, 2010.

The government had no immediate plans after the incident to raise the threat level, a federal government source said. 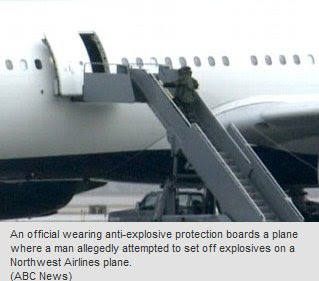 The suspect told authorities that he had explosive powder taped to his leg and used a syringe of chemicals to mix with the powder that was to cause explosion. This is of concert because it is a method of mixing that is consistent with terror techniques...

...An in-flight emergency was declared when a fire indicator light when on in the cockpit, according to the Federal Aviation Administration. The pilot asked for airport rescue and firefighting services, and for law enforcement to meet the flight at gate, the TSA said.

It is unclear how powerful the explosive could have been and what the man's intentions were. Initial reports were that fireworks or firecrackers had gone off on the plane.

The man suffered second-degree burns, which is consistent with a small fireworks device, police sources said...

The Airbus A330-300, a twin-engine jet, was carrying 278 passengers. Michelle Malkin has more information.

at 10:31 PM
Email ThisBlogThis!Share to TwitterShare to FacebookShare to Pinterest
Labels: extremism

Fox News today had a diagram showing that his seat position was one that was located directly over the plane's fuel tanks...
They speculate that the choice was deliberate rather than chance.