Everyone Do Your Jazz Hands: Stripping Out Bureau of Labor Statistics' Fudge-Factors Reveals Real Unemployment Rate is 11.8%, not 9.5% 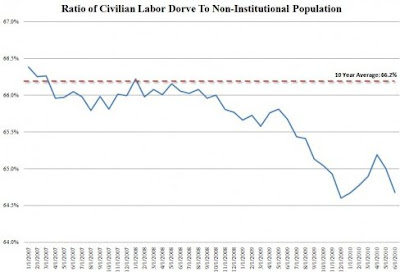 What this chart implies is that if there was a mean reversion to the last 10 year labor force participation average rate of 66.2%, there should be another 3.5 million jobless added to the 14.6 million tally. And as this differential is the easiest thing in the world for the BLS to fudge, adding the two and dividing by the labor force of 153,74, we get an unemployment rate of 11.8%, leaving aside all other such fudge factors are government hiring, temporary workers, birth death, etc.

Is it any wonder that the "scariest job chart ever" just got uglier? 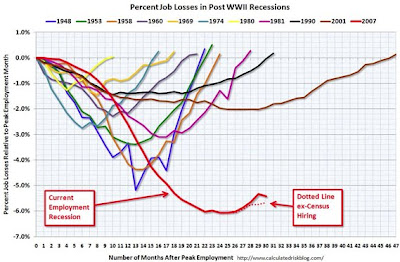 The American people are truly feeling the powerful thrusts of The Obama Recovery™.

at 10:56 AM
Email ThisBlogThis!Share to TwitterShare to FacebookShare to Pinterest
Labels: Democrats, Economy, Obama, Pelosi, Reid