AFTRA -- the union of television and radio professionals -- is up in arms over the unprecedented news blackout in the Gulf.

As an affiliate of the AFL-CIO, its defection from the Obama-union duopoly is noteworthy. It represents another mini-rebellion of sorts as increasing numbers of union members are directly harmed by the actions of an administration with only its own interests at heart.

If you're a journalist impacted by the blackout, AFTRA wants to hear from you.

Although I didn't have to look hard to find a case where a journalist was unable to view damage from the spill. Anderson Cooper, for one, cut loose on the White House for its unprecedented behavior in suppressing news stories.

[The federal government announced] a new rule... today backed by the force of law and the threat of fines and felony charges, a rule that will prevent reporters and photographers and anyone else from getting anywhere close to booms and oil-soaked wildlife and just about any place we need to be. 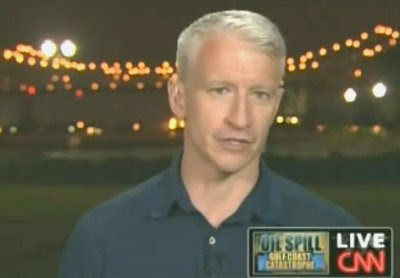 [This comes]...despite what Admiral Thad Allen promised about transparency just nearly a month ago. Here is what he said back then.

...Shots of oil on beaches with booms, stay 65 feet away. Pictures of oil-soaked booms uselessly laying in the water because they haven't been collected like they should, you can't get close enough to see that. And, believe me, that is out there.

But you only know that if you get close to it, and now you can't without permission. Violators could face a fine of $40,000 and Class D felony charges. 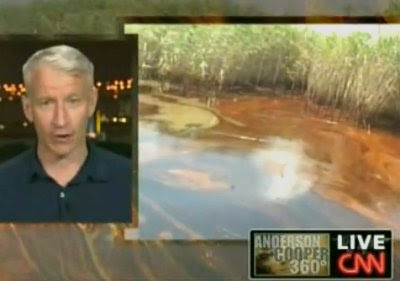 Yes, you are the enemy here, Mr. Cooper.

You see, the President is -- first, second and always -- concerned with his image.

It took him months to make up his mind about troop levels in Afghanistan but fired Gen. Stanley McChrystal in less than a day after the Rolling Stone reported unflattering remarks by the general's staff.

The president talks about himself endlessly in speeches.

Fox News, Sean Hannity and talk radio, among other critics, were repeatedly singled out by Obama before, during and after his election.

His personal logo is stamped on all of his fund-raising material; and he has his own political action wing -- Organizing For America -- that does not appear to be under the control of the Democrat party.

James Lewis characterizes Obama as "a malignant narcissist", the characteristics for which include:

Mark Levin believes that President Obama thinks and acts like a dictator. The two concepts are not mutually exclusive.

Obama's narcissism manifests itself with a maniacal focus on his goals, irrespective of history, facts, logic and reason. A simple example: his tireless efforts to jam socialized medicine down the American people's throats. Adding a new entitlement program when the country can't afford it's existing entitlements? Solvency is of no concern to Obama.

Anderson Cooper and AFTRA are livid with this administration because of the media blackout. But these dictatorial measures were easy to predict.

If there's one thing this President hates -- even more than capitalism, private property and individual liberty -- it's criticism. Watch out, Democrat journalists. First they came for Fox News...

What happened to Transparency?

The old Orwellian swindle is alive and well in the modern Democratic Party.

Team Obama, and the Democrats in control of Washington, long ago became a cheap parody of a parody.

Can anyone imagine the outcry if the Bush Administration TRIED something like this?

the leftists used to talk about bush's 'imperial presidency'... because he tried to wiretap suspect calls to pakistan.

funny, we don't hear much about that 'imperial persidency' any more.

All the MSM "journalists" are like women who will never leave their husband/boyfriend no matter how hard he beats and humiliates them. They "love" him too much.

Two years ago I would tell the Obamaworshipping trolls on various boards that they were being used and that, in the end, their Obamamessiah would throw them under the bus when their usefulness had ended. They are all discovering that what I told them is true. They better hope that they do not discover the second part of what I told them about their fate is true. For that all you have to do is read up about Ernst Rohm and the SA or the People's Temple and Jonestown. It has been forever thus with narcissistic demagogues with delusions of godhood

@Nahanni -- good to see you! Now I've got to get a suitable subject for a "pass the popcorn" title!

Yep, the middle class that Obama deep down despises (clinging to their guns and bibles) is coming to grips with the abuse and hatred emanating from this white house.

This is classic Mao. Control the message by controlling the environment. It is funny to see the "deer in the headlights" look on Cooper as he starts to realize being an "useful idiot" isn't all that after all.

Americans Are Getting Angry, Very Angry!

Obama and his Neomarxists intend to drown out the voice of Americans with Obama/Marxist propaganda, enforcing new regulations that will cripple bloggers and other alternative media from disseminating information, free speech that grass-roots among other organizations depend on to make informed decisions.

Obama’s support of the DISCLOSE Act confirmed what many Americans already believed; that Obama and certain Democrats in Congress intend to strangle the flow of information. If Obama and his leftists associations get their way, our Children will be brainwashed by Obama’s one-sided propaganda at school, through Obama controlled Radio, TV and Obama media policies that restrict the free flow of information. Historically when communists attempted or took over a country, one of their first steps was to control the media and all forms of public communications to control Civilian populations.

When Russia took over Hungary, it immediately took control of the Radio stations to thwart Citizen resistance and to psychologically control the People.

Considering the Obama administration’s obsession with controlling all media, one might ask, are some of the persons inside and outside U.S. Government, working with the Obama administration to push the Disclose Act and other censorship regulations, involved in causes that promulgate overthrow of the United States? While some in the Obama Government say they support dismantling capitalism, brick by brick, does their endgame call for destruction of the United States? If it does, what should Americans do to stop it?

Does the Obama administration’s proposed censorship of free speech e.g., the Disclose Act threaten National Security? In other countries where members of political parties and ideological extremists attempted or succeeded in this kind of forced censorship, forbidding Citizens to receive information, they have been arrested for treason among other crimes.
The Obama administration appears intended to curtail Americans’ right to know, restrict American’s right to communicate via the Internet and the Obama administration admits they want to pay writers in newspapers and other media to covertly propagandize their point of view. Is this not treason?

Just in case we need these to link to "the outside".