'Obama has created a wasteland of economic ruin and depression that looks much like... Mad Max' 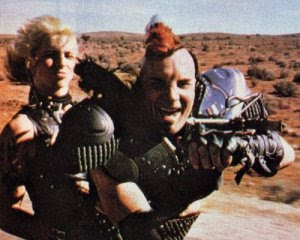 You won't find proof of the damage Obama is doing on Wall Street, but rather on Main Street. My friends are all part of the economic engine of America: Small business. Small business creates 75 percent of new jobs (and a majority of all jobs). I called one friend who was a wealthy restaurant owner. He says business is off by 60 percent. He's drowning in debt. He won't last much longer. His wealth is gone.

I called another friend in the business of home improvement. He says business is off 90 percent from two years ago. My contractor just filed personal bankruptcy. She won't be building any more homes. The hair salon where I've had my hair cut for years closed earlier this year. Bankrupt. But here's the clincher -- ESPN Zone just closed all their restaurants across the country. If they can't make it selling cheap food and overpriced beer with 100 big screens blaring every sporting event on the planet to a sports-crazed society, we are all in deep, deep trouble.

I've polled all my friends who own small businesses -- many of them in the Internet and high-tech fields. They all agree that in this new Obama world of high business taxes, income taxes, payroll taxes, capital gains taxes, and workers compensation taxes, the key to success is to avoid employees. The only way to survive as a business owner today is by keeping the payroll very low and by hiring only independent contractors or part-time employees provided by temp agencies.

Over at CNBC, analysts say that Dow is repeating the "Great Depression Pattern":

The Dow Jones Industrial Average is repeating a pattern that appeared just before markets fell during the Great Depression, Daryl Guppy, CEO at Guppytraders.com, told CNBC Monday... “Those who don’t remember history are doomed to repeat it…there was a head and shoulders pattern that developed before the Depression in 1929, then with the recovery in 1930 we had another head and shoulders pattern that preceded a fall in the market, and in the current Dow situation we see an exact repeat of that environment,” Guppy said. 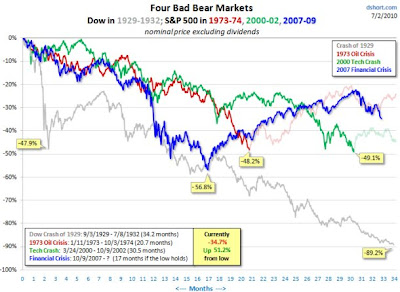 The view abroad confirms Guppy's observation: "The US is still trapped in depression a full 18 months into zero interest rates, quantitative easing (QE), and fiscal stimulus that has pushed the budget deficit above 10pc of GDP."

The share of the US working-age population with jobs in June actually fell from 58.7pc to 58.5pc. This is the real stress indicator. The ratio was 63pc three years ago. Eight million jobs have been lost. 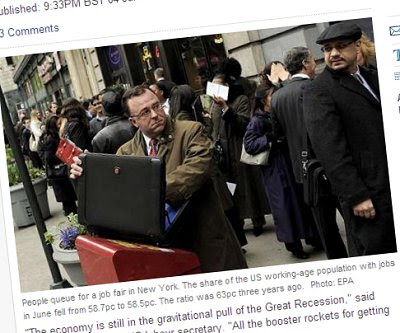 The average time needed to find a job has risen to a record 35.2 weeks. Nothing like this has been seen before in the post-war era. Jeff Weninger, of Harris Private Bank, said this compares with a peak of 21.2 weeks in the Volcker recession of the early 1980s...

...The housing market is already crumbling as government props are pulled away. The expiry of homebuyers' tax credit led to a 30pc fall in the number of buyers signing contracts in May. "It is cataclysmic," said David Bloom from HSBC.

It has now become clear that, outside of the burgeoning field of Census takers, there will be no major increase in new jobs for years to come. Outside government, Obama has created a wasteland of economic ruin and depression that looks much like the landscape of Mel Gibson's first movie "Mad Max." Without a printing press in Obama's world, you're just plain out of luck.

What if, as some believe, this is all intentional? In 2009, James Simpson came to just that conclusion: 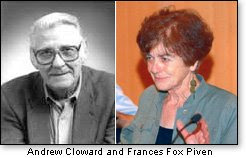 It is time to cast aside all remaining doubt. President Obama is not trying to lead America forward to recovery, prosperity and strength. Quite the opposite, in fact...

...The real goal of "health care" legislation, the real goal of "cap-and-trade," and the real goal of the "stimulus" is to rip the guts out of our private economy and transfer wide swaths of it over to the government to control. Do not be deluded by the propaganda. These initiatives are vehicles for change. They are not goals in and of themselves except in their ability to deliver power. They and will make matters much worse, for that is their design.

You don't have to be a conspiracy theorist to recognize the very real strategies advocated by Cloward and Piven. If you care about this country, you'll do everything you can to organize, raise money, and spread the word about the malevolent cabal that is systematically deconstructing America from within.

November won't matter if we're not counting the votes ourselves.

Voting is nothing. Counting them is everything, and the SEIU and ACORN have that all sewed up, with the Black Panthers clamping down on the less-sure precincts.

Waiting for and hoping for a November turnaround will be a huge disappointment, I fear.

As Scott Brown proved -- even in the bluest of blue states and, some would say, one of the most corrupt -- the GOP can win anywhere so long as the margins are high.

There is no acceptable alternative to winning in November. I can't give up and won't give up.

I just want to say I really like your blog! Keep up the great work...

there's a lot of cash on the sidelines that can come in under the right circumstances and do a lot of good and create prosperity.

if we elect a gop congress.

The Cloward-Piven Strategy is, in my mind, one of the best single reasons why academic tenure must (and likely will) be abolished. After all, it's kind of hard for bullet-headed profs to day-dream ways to bring on socialist utopias when they're spending all their time worrying about their bills, holding on to their jobs, and when--best of all--they don't have the power to psychologically abuse their students and colleagues.

Krugman will have you know Obama is saving the planet.

Ok, I'm going in the garage right now. I have an '83 GPz 750 that just need a tune-up, a leather jacket that needs some "embellishment", I know I have a crossbow or two. Now I need to find a double barrel shotgun, a dog, and a friend with an autogyro. Heh, powered parachute works in a pinch.

Oh, and lets remember that financial Armageddon happened under the reign of King George W., who was also responsible for the bailout of Wall Street.

Educate yourself! (Don't worry, these are in cartoon form, should be easy to understand even if you don't read well)

• Don't cry for me, America

"Oh, and lets remember that financial Armageddon happened under the reign of King George W., who was also responsible for the bailout of Wall Street."

Anonymous, dude, the bailout was OK'd by the majority Democrat Congress, you know, the same one we're still burdened with.

Raising tax with the gigantic, pork ridden and ineffectual Stimulus(tm) helped hamstring the slow-as-molasses recovery. This administration can't see the relationship between their action(s) and the consequences of such.

The best and brightest they ain't. Stop covering for them, they're running with the big boys now, they need to buck up and do some work.

No, don't blame the GOP. They're the minority party by numbers. Much of what they want got killed in committee by the majority Dems.

The Dems needs to rise to the occasion to govern and act.

I ain't holding my breath for that.