As the EPA, the Department of the Interior and the State Department do their level best to suppress exploitation of America's domestic energy sources, the Red Chinese are on the move, 24 by seven, 365, around the globe. 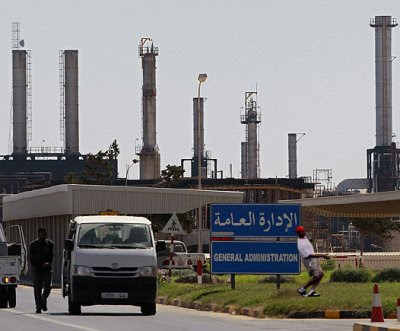 • Beijing switches its allegiance to major oil supplier's rebel council: "CHINA HAS called for “a stable transition of power” in Libya and said it had made contact with the rebels there, a sign it has switched allegiances from Muammar Gadafy in a bid to ensure the flow of oil from Libya is not jeopardised... While Beijing backed Col Gadafy initially – as an authoritarian government itself, Beijing is not quick to call for the demise of other such regimes – it had also been stepping up engagement with Libyan rebel leaders in recent months."

• China and Iran Join Hands on Oil: "Recently, an oil deal was done between China and Iran; they’re bypassing the US dollar by having a trade agreement for the oil. If you look at what China has done in East Africa, you can see that Chinese firms are investing heavily in the region to secure future oil production."

In the mean time, the Obama administration's Cloward-Piven strategy is literally dismantling the United States' energy industry piece by systematic piece. Our infrastructure is truly being hollowed out from within, not unlike an infestation of termites inside a home's foundation.