Media Unearths Rick Perry's College Transcripts In Nothing Flat, But Somehow Unable to Find Any Record of Barack Obama's Existence

You may have missed the Left's preemptive attack on Rick Perry. The GOP candidate's transcripts were "mysteriously released" a few days ago, which smacks of another odd disclosure. 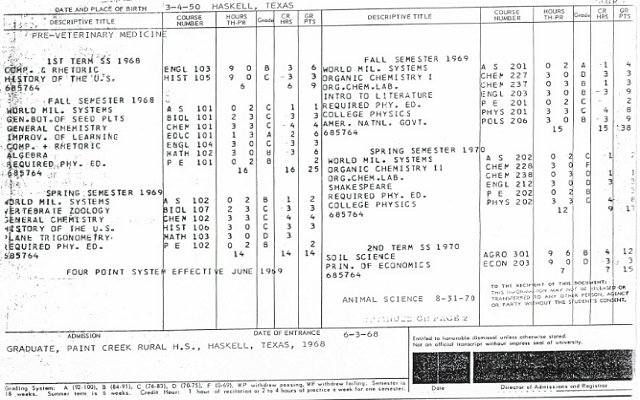 But I'm sure that's just coincidental.

You know, I find the media quite honest and diligent. It mocks and vilifies Rick Perry's college transcripts, yet somehow forgot about checking Barack Obama's:

But I'm sure that's just an innocent oversight.

I am sure that we have not heard the end of Governor Perry's transcript. I did the math, after converting his 1968 grades to a 4.0 scale. I was disappointed that Yell Leader Perry compiled only a 2.0 grade-point average -- it kept him out of Veterinary School.

Now, more than ever, we need Sarah Palin to suck up all of Romney's oxygen.

First, Perry should offer to put his resume up against Obama's any time the media wants. Second, when I was at Oklahoma State (also an Ag school), Pre-Vet was considered one of the toughest majors along with Chemical Engineering. Organic Chemistry was a weed-out course, and lots of people struggled with it. What speaks loudest (to me), is that Perry didn't major in Political Science, or Pre-Law, or Sociology. He majored in something that could help him earn a living. I've also had a lot of friends who went to A&M, and being in the Corps of Cadets, and to be a Yell Leader is a big deal. But the proof is in the pudding, and Perry has gotten the job done.

Obama. With or without his papers he's still incompetent.

I clicked over to the Huffpoo to see their original story. They titled it "Rick Perry's College Transcript: A Lot Of Cs And Ds".

Then I looked at the image they published and added up the grades it shows.

Of the 59 courses graded in the image there are:

There are more than twice as many B's as D's. Wouldn't an accurate summary be "A lot of Bs and Cs"?

Leftist must lie to make a point. Reality never seems to support the "reality based community".

And they wonder why they are viewed as a propaganda wing of the left?

FIrst, you don't even want to know the fluff courses Obama took. And, I will bet you you'll find real amazing course descriptions. How does "Introduction to Marxist Studies" sound to you? I'll bet you any amount of money that "Organic Chemistry" and "Chemical Engineering" are not on Obama's transcripts.
Second, if it took a genius like Obama to destroy the country, perhaps we don't want another genius as President.

Truly not the best of grades. But what does that really tell us? He wasn't taking it seriously? Learning style not compatible with standard teaching practices? A little ADD (although don't get me started on that topic) Those with ADD tend to have higher IQ's when tested? Grades are not necessarily markers of intelligence--there are a lot of people with college degrees out there who aren't all that 'smart'.
Einstein (remember him?) didn't do well in the structured environment of a classroom, neither did Edison. They were most likely right brainer's who thought outside of the box--who didn't just regurgitate information---thankfully. Peter Jennings was a high school drop out. Abraham Lincoln was self-taught for the most part.
Learning shouldn't happen just in classroom's, it should be happening in life and anyone with average intelligence and desire can self-educate.
Perry is by no means stupid. And as noted the proof is in the pudding.

Let the HuffingPo's and such spend all their time and effort "pointing and laughing" at Perry's grades-- it proves they have NO good arguments that support "their guy", because they DON'T have ANY of HIS school records....

Sounds like a perfect Republican candidate. Clueless about the economy.

And this jackwagon is STILL going on about the birth certificate? Haven't you mindless baboons given up on that one yet? The official document was released. You can take off the tin foil hats now.

Perry went to an extremely rural school growing up, which no doubt wasn't that great. Now imagine what the same website would be saying if the candidate was a poor black person from the inner city?

I wouldn't worry too much about grades. Now, maybe when he went things were different (though I doubt it). If you aren't on an academic track or favored or a solid cheat or your parents aren't buying a new building for the college or university, those ARE the grades even a normal healthy smart guy will get. Grading and teaching techniques have been moderated to favor females, the way they study, the way they test. That, of course, disfavors guys. (In spite of how useless women really are in those fields and how few of them there actually are.)

Even beyond that, I had courses in engineering (similar enough) where professors tried to crush gpa's. He wasn't the only one, he just was more honest about it and outright said that was his intent. That was their goal. As for Obama, he shouldn't have been IN any of those schools, so his grades are already questionable, if they ever are produced. Nothing like billionaire grandparents and being a protected species.

These grades are fairly typical. I didn't realize how typical they were until I was assigned duties as a student guidance counsellor. C really is an average grade at some schools.

He got an A in Education. That frightens me even more about the Ed major.

In the 1950's and 1960's the average undergraduate grade was C. Many courses were graded on a symmetrical curve, like the normal distribution, with a small and equal number of A's ad F's, larger and equal numbers of B's and D's, and a majority of C's. C was not only the average grade, it was considered satisfactory. Today C is considered an inadequate grade and B is satisfactory. Students didn't get smarter. The grading scale slid.

Many young people who have been rewarded inflated grades under the new standards will jump to the wrong conclusion about Perry's grades.

B was the average grade in graduate school, which required a B average to remain in the graduate program.

Wow, much rationalizing happening here? Yes, most colleges practiced less grade inflation 40 years ago... but still, those are *not* and never were "the grades even a normal healthy smart guy will get," not by a long shot. And Texas A&M was never exactly one of the country's most challenging schools.

C in history, D in economics, nothing above C in *any* science class, and an F in a prereq for his major? How is this the background any sane person could want in a candidate for national office? To compare Perry to Einstein, Lincoln, or even Peter Jennings... c'mon. If anyone really thinks Perry is "by no means stupid," I'd sure be curious to know what the evidence is.

And to be still going on now about Obama's choice to keep his transcripts private... what, is it really that important to know *exactly* how much smarter the incumbent is than this self-evident idiot? I have lots of criticisms of Obama, but at no point would I ever delude myself into thinking he's not intelligent.

Sounds like a perfect Republican candidate. Clueless about the economy."