Just as successful as Cash-for-Clunkers: Obama MPG demands will add $11,000 to the price of the average car

You didn't have to be Kreskin to see this coming:

The Obama Administration’s new fuel economy standards will result in the retail price of average motor vehicles to increase over $11,000, according to a study conducted by the Center for Automotive Research. 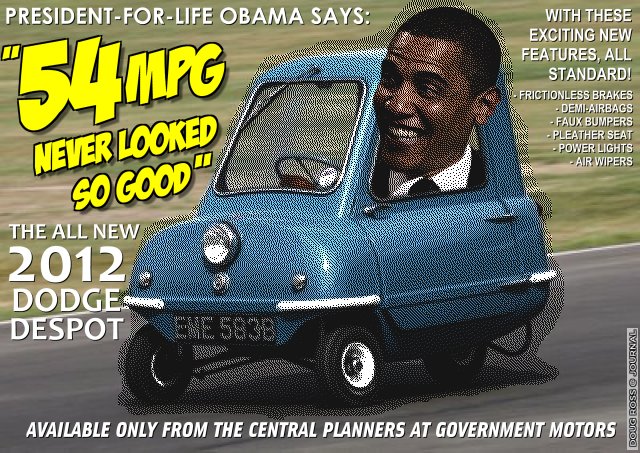 The Obama administration’s new fuel economy standards would require automakers to produce cars and light trucks with an average fuel economy of 54.5 mpg by 2025. The Center for Automotive Research says their study is “the result of 11 months of effort and investigation by researchers at CAR in 2010-2011.”

...“The Obama administration’s latest fuel economy mandates are an aggressive step away from consumer choice and towards government control,” [Thomas Pyle, the president of the Institute for Energy Research] said in a USA Today op-ed... "Every day, Americans are seeing the negative consequences of the administration’s increasingly aggressive meddling in the economy—more government control and less consumer choice..."


Of course, the President does have one successful jobs program he can claim.

It involves hiring government bureaucrats and regulators, and we simply have to give these people something to do, right?