For a federal government that regulates school bake sales, light bulbs, shower heads and toilets it seems curious indeed that it has no idea what people are buying with food stamps.

A bit of background: the "Electronic Benefits Transfer Program" (or EBT) is a credit-card issued by the federal government to reduce "the stigma sometimes associated with public assistance" (click here for an entertaining -- and necessarily profane -- music video explaining EBTs).

As you probably know, food stamps and other wealth redistribution schemes have exploded to historic highs under the direction of the Obama administration.

What you may not know is that even the USDA has no clue what kinds of foods are "legitimately" purchased with EBTs: for example, junk food, candy, and other foodstuffs that increase obesity and diabetes. Why should we care? Because not only are taxpayers funding unhealthy eating -- they are then footing the bill for any resulting medical bills under programs like Medicaid and SCHIP.

People who qualify for food stamps - known as the Supplemental Nutrition Assistance Program, or SNAP - have a growing variety of places where they can use their electronic benefit (EBT) cards, including supermarkets, gas stations, Papa Murphy pizza shops and even dollar-discount stores - essentially, any business that can install coolers to stock specific kinds of food and meet minimum federal requirements...

...Nationally, about 210,000 food stamp vendors split the $64.7 billion that SNAP participants spent last year... While the cost of SNAP and the number of people it serves aren't in doubt, other information about the government program is more difficult to get... 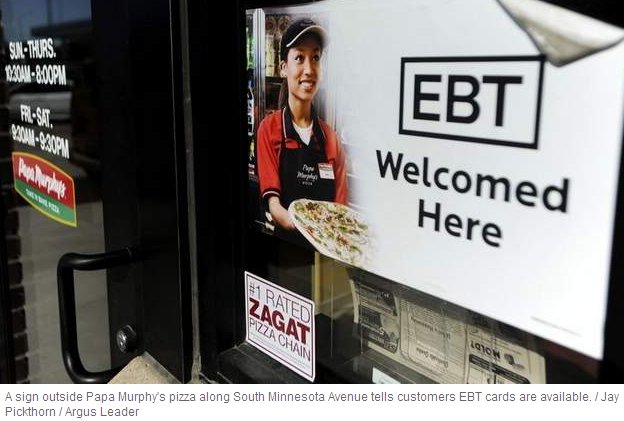 ...The high number of convenience stores in SNAP alarms public health advocates... In an era of rising obesity rates, some argue that restrictions should be placed on what people can buy with their EBT cards. Without restrictions, participants often eat foods that lead to health problems, which then lead to higher costs in government-run health care plans... "It doesn't seem to me that government should buy things that make people sick and then clean up the mess later," said Kelly Brownell, director of the Yale University Rudd Center for Food Policy and Obesity...

...One thing is certain: Not even the USDA knows what people are buying with food stamps. Earlier this year, the department sent a request to companies seeking help in compiling hard data...


Doesn't that just warm the cockles of your heart? On average, each taxpaying household in America sends about $1,000 a year to the USDA to provide food stamps to the "needy". And the USDA has no idea what kinds of foods are actually being purchased with your money.

And then there's the criminal activity associated with EBTs. As you might have predicted with billions in "free", taxpayer money at stake, fraud is rampant with EBTs. Recent investigations in Arizona, Connecticut, Illinois*, Indiana*, Kansas*, Massachusetts, Michigan*, Minnesota*, New York, Ohio*, Oklahoma*, Oregon, South Carolina, Washington, and Wyoming* point to systematic exploitation of food stamps for criminal and terrorist activities.

Additionally, multi-state investigations for "water dumping" and other large-scale scams are also on the rise.

A brief investigation by a Seattle television station discovered that EBTs are routinely used as barter for illegal goods and services: 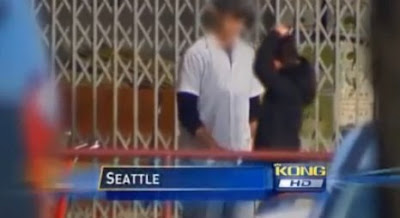 Last month, KING 5 recorded illegal transactions outside a Seattle supermarket. People were handing cards over to one of several people working outside the store. They are part of a ring that pays 50 cents on the dollar for food stamps, which are distributed monthly on debit cards.

KING 5 recorded the video with help from a man we'll call Peter. He’s a food stamp recipient who says addicts especially are eager to trade food-only benefits for half their value in cash.

“(They are) buying crack, booze, prostitutes,” says Peter... We wanted to ask the USDA how it can manage a bigger program with fewer investigations, but the department refused multiple requests for an on-camera interview during our visit to Washington D.C. last month... The USDA division that administers food stamps, the Food and Nutrition Services (FNS), was particularly tight-lipped. FNS spokesman Jack Currie refused to return phone calls from the KING 5 Investigators.


In the last five years, federal food stamp spending has soared from $28.5 billion to more than $64 billion a year. In 2012, the program may cost taxpayers $80 billion.

The federal government is completely out-of-control. It can't manage a food stamp program, yet it wants to control every aspect of our lives from our health care to our light bulbs.

That's how America was built: individual initiative. Not by building a permanent underclass addicted to government largesse, living in a permanent state of poverty, helplessness, and misery.

That may be what Democrats want. But that's not what real Americans want. Remember in 2012.

Just another instrument of tyranny if you give it a good think.
Another ruling elite deviant method of destroying the morals and principles of self determination, prosperity and Liberty.
No problem using police state tactics going after raw milk producers, backyard rabbit farms Amish farmers, guitar makers, desert rats, selling guns to Mexican drug cartels, Tea Party and other Hobbit type law abiding patriotic Americans etc.
But the same government can not keep tabs on electronic debit card transactions in this day and age of phenomenal technical resources, that enable it to spy on its own citizens, that it deems a threat to its tyrannical power?
Ya right.
Man I'm so freaking sick of the lie and bullshit factory known as the federal government.
Who do they think they are shitting?

Subjugation of the population by tyrants the world over since the beginning of history of the human race involves control over the basics of life and liberty.
Control the food
Control weapons
Control means of self created wealth and prosperity,(jobs, business's)
Control peoples dignity/education/sources of information
Control sources of energy
Presto!
Amerika today!

I called a local clothing store that showed "EBT accepted here" in their ad and asked if they sold food. No was the answer, so I asked to speak to a manager. The manager said that unemployment and cash welfare benefits are now on the EBT card so as to lessen the stigma of using a *government* card, and that computer registers cannot discern the difference between SNAP, welfare or unemployment. I had $16 in my weekly food budget because of a cutback on hours, so I was a wee bit ticked.

Every day brings yet another governmental sharp stick in the eye.

Great post, Doug! Most people aren't aware of all the things we should not be paying for while funding EBT but are. I linked to your post here:
http://zillablog.marezilla.com/2011/08/it-rained.html

I tried to apply for the program and they denied me and my family of 3. We are struggling to put food on the table, but they will give more than enough to those that sell their foodstamps. Some of these people don't have to work and may never work if they keep on getting handouts...

Stop bitchn if u dont like it get your ass in the white house and do somthin. So what talking about ebt. Most people on it do need it. Ya some abuse it. Dosnt mean all do. If u wana talk about somthing talk about how much our white house sucks dick. We havnt had a good man In office sence bill clintn. And ya theres gana be more people on ebt and other programs. Theres alot of people in america more and more everyday. Stop bitchn. U bitch about poor people abusing systems. WHAT ABOUT THE RICH PEOPLE WHO ABUSE 5 MILLON OTHER SYSTEMS. GET YOUR EYES OFF THE POOR YOU DUMBASS!HOW ABOUT RICH PEOPLE PAYN MORE TAXS TO HELP. BUT NO. YOU GREADY ASS WHITE PEOPLE WONT DO THAT. SO STOP BITCHN

And once again the left plays the expired race card. They never tire of it and yet they continue to claim that WE are the racists.

This whole post has me seeing red...I am on benifits & most of us who are good hard working ppl do not abuse the system, its like saying one bad apple spoils the whole barrell, so not fair & so not cool, honestly ppl think b4 u open ur mouths and pure crap rolls out. I am a decent, hard working, red blooded American who's ability to survive on my own has been stripped away, & that's what 98% of us are, also stop judging ppl in line with iphones, as stores like Cricket now sell phones like that without contracts, so the presence of an iphone or fancy droid does not mean these ppl don't need the help, you know what stop judging at all, its not our place 2 judge.

You, sir, are a misinformed bigot. I am a veteran of the U.S. armed forces, HONORABLY discharged after my five years of service, am a college graduate with a bachelor's degree in nursing with a 3.4 GPA, and had been gainfully employed, without any gaps in my work history, from the time I was 15 until PTSD from my life experiences, which I am gathering that you have had NONE of, became something that I could no longer live my life with unaddressed full - time for a TEMPORARY amount of time. That's 30 years of working my ass off. Get your head out of your ass and get informed, you slimy jerk-off.