Amnesty Doubleheader: not only will White House bring a halt to most deportations of illegals, it will also grant them... work permits


If the administration has implemented a more cynical and lawless attempt to garner votes than this, I have yet to hear of it. The good news: I'm sure most unemployed Americans will not find comfort in the President's latest 'jobs plan'. 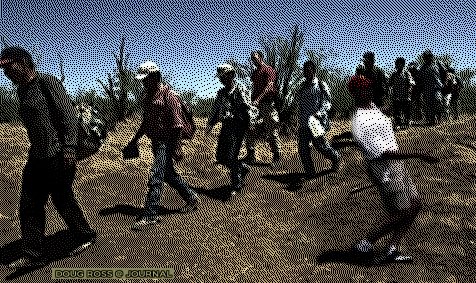 According to a Wall Street Journal report, illegal aliens will be eligible to receive work permits if their deportation is deferred through the Obama Administration's new policy. Yesterday, the Administration announced that the Department of Homeland Security will review all deportation cases on a case-by-case basis and only deport illegal aliens who have been convicted of crimes...


Though "comprehensive immigration reform" and other legislative forms of amnesty for illegal aliens has never passed Congress, the President has assumed powers that could almost be termed 'dictatorial'; he has bypassed the legislative process to achieve the same end result.

The Obama Administration announced on Thursday that it will individually review the 300,000 cases of illegal aliens currently holding deportation orders in an effort to appease his pro-amnesty critics and last year's record number of deportations.

The Administration deported 400,000 illegal aliens last year -- less than half had been convicted for other crimes. Pres. Obama is pledging to halt deportations of non-criminal illegal aliens. Illegal aliens that are considered low-priority deportations will no longer be the focus, including young people who were brought to the U.S. as children, military veterans and spouses of military personnel.


And, yes, I'm going to be adding these latest tyrannical outrages to President Barack Obama's Complete List of Historic Firsts.

Impeach this crook. He is single handedly ruining this country. Intentionally!

Not only is this an impeachable offense, getting his missing votes by fiat, but black americans have to be infuriated by that-it affects them more than anyone else.
Where is one in Congress with b*lls challenging this guy criminality? Just one?

If they can check case by case then it will be possible to deport them one at a time till it matches or equals President Eisenhowers 13 million.

America needs to start deportation of illegals now: IT CAN BE DONE AND IT WAS DONE A FEW TIMES IN RECENT HISTORY

(President Hoover ordered the deportation of ALL illegal aliens during the Great Depression so as to make jobs available for Americans, Harry Truman deported over 2 million illegal’s after WWll to create jobs for returning veterans, and again in 1954 Dwight D. Eisenhower deported 13 million Mexican Nationals)

"compete with 22 million Americans who can't find a full-time job. "

oh this is weird, last time i checked obama hasn't revealed his job plan until labor day which is in sept... i want all the information not just your propaganda. i might dislike obama but i still want all the facts and not paraphrases.

This is never gonna happen, he's just trying to fool illegals once again.

This will end up with the Supreme Court, declared un-constitutional to go around Congress!

What a bunch of BS. You're intentionally "forgetting" that:
1. most of the illegal immigrants are already sucking those sweet entitlements, therefore they won't be competing for any jobs.
2. Jobs they hold are ones which those 22 million Americans aren't allowed to compete to do.

FTFY, Copperhead. You love the thought of having a new class of slaves. It has been seen at many meat processors, for example: fire the illegals and Americans are lined up around the block.