"Pick the Target, Freeze It, Personalize It and Polarize It." --Saul Alinsky, Rules for Radicals 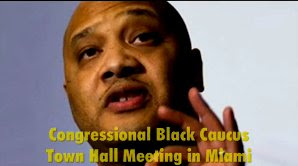 Repeat a lie often enough, through enough different propagandists, and a substantial percentage of the populace will begin to believe it.

The tactic is called "The Big Lie" and it was exploited to great effect during the thirties by none other than Adolf Hitler's chief propagandist, Julius Streicher, to demonize Jews, Catholics, gypsies, homosexuals, the handicapped and other "undesirables".

And this tactic is being used -- plainly and obviously -- against the Tea Party.

In recent days, the execrable columnist Leonard Pitts, the ethically challenged Rep. Maxine Waters, the half-wit Rep. Frederica Wilson, the rhyming adulterer "Reverend" Jesse Jackson and a host of other far left kooks have echoed the same "Big Lie" as if reading off some invisible teleprompter.

But none has gone as far as the left-wing Islamist race-baiter named Andre Carson:


This theme was, in all likelihood, orchestrated by none other than David Axelrod. His purpose, like Alinsky, is to freeze the Tea Party, to personalize it and to polarize it.

Axelrod's obvious and outrageous "Big Lie"? That a disconnected, decentralized group of millions of law-abiding citizens -- people of every race, religion, creed and color... people who believe in Constitutional, limited, financially responsible government... people who gather peacefully in cities and towns across the United States! -- are violent racists bent on re-instituting Jim Crow?

No, Carson, you horrific schmuck: those Jim Crow-types, those Bull Connor-types, those poll tax bigots? They were all Democrats! Look it up, idiot! From the Ku Klux Klan of yesteryear to the Civil War's pro-slavery faction down to modern race-baiters like yourself: Democrats, each and every one.

No, the party of Lincoln and the party of Martin Luther King, Jr. is the Republican Party, you Marxist crackpot!

The Democrat CBC racists must ignore the fact that a growing cadre of strong black conservatives, led by Herman Cain, Rep. Allen West and Rep. Tim Scott, are among the most popular of all Tea Partiers. After all, facts, logic and reason were never the radical left's strong suits.

West himself had harsh words for Carson, writing to the head of the Congressional Black Caucus:

I believe it is incumbent on you to both condemn these types of hate-filled comments, and to disassociate the Congressional Black Caucus from these types of remarks. Otherwise, I will have to seriously reconsider my membership within the organization.

Congressman Carson’s desire to generally criticize a large grassroots group as racist is baseless and desperate. When individuals believe they are defeated in a political disagreement, they normally resort to race-baiting, which in my opinion is in itself racist.

I think what you see is a desire to not recognize some of the serious problems in the black community. To try to have a scapegoat that is the Tea Party … that’s just a distraction. The Tea Party stands for some basic, constitutional principles.


The tactics of Alinsky and Hitler and Farrakhan and Axelrod must be exposed for what they are.

Carson's rhetoric isn't simply hateful: it's dangerous. It sets the stage for violence and unrest. Even if only one person takes Carson's lies seriously, a terrible set of consequences can result. His lies are beyond the pale; they are unacceptable behavior for a member of Congress.

The House of Representatives must not let him get away with this behavior.

This jerk carson is in my district. He took over the job from his equally incompentent racist grandmother julia carson with little more qualifications than getting hold of her Rolodex ASAP. When julia died a few years ago, the media sucked up to her memory like nothing I have seen in quite some time, yet couldn't seem to come up with ONE accomplishment she had actually done for the district, excpet be a true party line voter for the DNC. So, andre is proud to continue that tradition of doing NOTHING for the district he is supposed to serve, and be a good little voter for pelosi when she comes calling on him. Carson even went as far as voting for cap and trade, knowing (I hope) that the state of Indiana is a gas and oil powered state, no nuclear or hydro, and that it would mean sharp increases in his constituent's energy prices. Yet the local media continue to suck up to him, including zero coverage of ths blatant lie about the Tea Party's ethics. I hope like hell we can deelect this jerk next time around.

According to Socialist Party of America:
http://www.scribd.com/doc/35733956/DSA-Members-American-Socialist-Voter-Democratic-Socialists-of-America-10-1-09