There are a lot of conflicting reports regarding the fate of Libya's nut-case dictator Muammar Gaddafi (spelling wrong? I don't care).

• He got whacked
• He's fled to Algeria and his sons are being held by rebels
• He's fleeing to Venezuela and the protective arms of Hugo Chavez
• Gaddafi will never flee, stating: "We will fight to the last drop of blood."

But Dave in Texas wins our Quote o' the Day award. 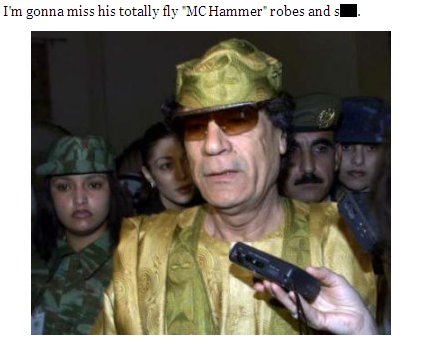 Can't touch this? Apparently they could.

Of course, Libya is said to own 144 tons of physical gold.

Which, at the current spot price, should yield nearly $9 billion for the rebels.

Which should fund... something or other.

Obama said he wanted a peaceful future for Libya.... yea right, after he bombed the living snot out of them.

I wouldn't be on all that gold being there. Qaddafi probably only hung around as long as he did to make sure he got it out of there first.