Of course, in real life, President Obama and his advisers would no more have the cojones to visit real inner cities than they would to visit Abbottabad, Pakistan.

But imagine, for a moment, if the Obama 2012 campaign I Feel Your Pain bus tour actually made stops in the inner cities of, say, Detroit and Philadelphia. 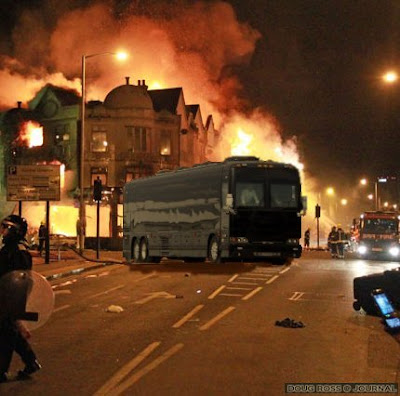 You can just imagine the topics of the President's speech:

• 36 percent of Michigan children had no parent employed full-time in 2009, which is almost certainly the insidious side-effect of ATMs on society.

• In July, the unemployment rate of African-American teens was 39.2 percent, a direct result of the tsunami in Japan.

• Overall unemployment of African-Americans was 17 percent, which can be traced back to the riots and economic upheaval in Greece.

• Flash mobs are swarming urban centers, destroying retail establishments and assaulting passers-by, the inevitable result of the Internet on civility.

• Poor, inner-city kids are locked in horrible public school systems with no way out -- not because of the ACLU and the teachers' unions' repellent war against school choice and vouchers -- but because of the global uncertainty unleashed by the "Arab Spring" revolts.

In addition, the President will continue to blame the overall economic downturn on a string of "bad luck", as all presidents do in tough times.