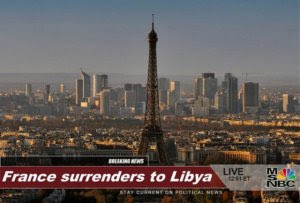 Many are ready to party about the political demise of the hated, eccentric, and foul Mu'ammar al-Qaddafi as rebel troops move into Tripoli. I am not partying. Here's why not.

The NATO intervention in March 2011 was done without due diligence as to who it is in Benghazi that it was helping. To this day, their identity is a mystery. Chances are good that Islamist forces are hiding behind more benign elements, waiting for the right moment to pounce, as roughly happened in Iran in 1978-79, when Islamists did not make clear their strength nor their program until the shah was well disposed of. Should that be the case in Libya today, then the miserable Qaddafi will prove to be better than his successors for both the Libyan subjects of tyranny and the West.

I hope I am wrong and the rebels are modern and liberal. But I fear that a dead-end despotism will be replaced by the agents of a worldwide ideological movement. I fear that Western forces will have brought civilization's worst enemies to power.


There have been a series of credible reports that NATO -- in its quest to dislodge Gaddafi -- was actually assisting the rise of Al Qaeda in Libya. Nothing I've read thus far leads me to believe otherwise.

Of course, as Hillary Clinton once promised us during her magnificent efforts to bring peace to the Middle East, perhaps they're like "the moderate Taliban" -- and open to reason.

Good thing that President "Smart Power" is in office !!

Totally agree with you Doug. Nothing good can come out of this when the media refuse to dig into just who these 'rebels' are and whom is behind them.

I hate to say I told them so, but I warned about this months ago, as did a whole lot of other Conservative (and especially anti-jihad) bloggers. Nobody listened. As far back as April I knew that there were jihadis and al qaeda amongst the "rebels": http://zillablog.marezilla.com/2011/04/libyan-lunacy-linkaround.html
And lo and behold, the "draft" constitution for Libya is SHARIA:
http://www.jihadwatch.org/2011/08/libyan-draft-constitution-islam-is-the-religion-of-the-state-and-the-principal-source-of-legislation.html

Yessir. We are effed.

GEE IT'S FUNNY HOW A FELLA NAMED BARACK HUSSEIN OBAMA HAS FACILITATED THE RISE OF THE MB ON EGYPT AND AQ IN LIBYA.

AND LET ASSAD AND IRAN BE.

We are seeing the Moors rise all across the middle east and this time they have allies in Europe with no Charles Martel to stop them. This will get very ugly sooner than the left thinks.

Michael Ledeen has a nice map showing the extent of the Caliphate after Obama: