It turns out that there is at least one way to stop the EPA: sic Chuck Schumer on 'em. I think we can call this "Crony Marxism": 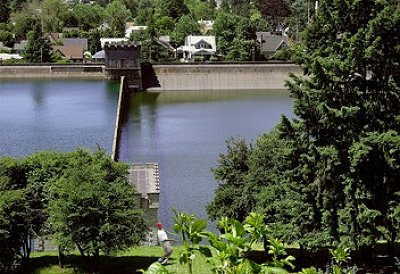 For seven years, the Portland Water Bureau and several activist groups have been fighting a national Environmental Protection Agency requirement stating that the city must cover its iconic reservoirs to protect against cryptosporidium—a bacteria that testing has repeatedly shown isn't a threat in Rose City water (though apparently drunken urination is).

In March, it looked like the city had lost and would have to spend $500 million to cover the city's five reservoirs and build an ultraviolet treatment plant or be found in violation of federal law. Altogether, the apparently-not-necessary public health project would add an $21 to an average water user's monthly bill.

But from the East comes a sign of hope! New York state is fighting the same rule, not wanting to spend $1.6 billion to put a concrete cap on an upstate reservoir. New York Senator Chuck Schumer wrote a letter to the EPA asking them to scrap the plan and, miracle of miracles, the EPA wrote back this weekend saying they would reconsider. If the EPA is willing to reconsider for New York, they could be willing to reconsider for Oregon, too!

Unless you have a powerful, fellow Marxist Senator in your corner (though this being Oregon, that may indeed be the case), I wouldn't count on any breaks from the EPA.

Because if we still had a Constitution in this country, "equal protection" would mean something. But the unelected fourth branch of government -- the immense, unaccountable federal bureaucracy -- doesn't give a damn what you and I think. Or what's fair. Or whether the Constitution even authorizes its very existence.

Which is something to think about long and hard in 2012.

The marxist vineyard tripper should slow the epa down but that will not happen. They are all red now and still hiring more of the idiots to completely kill the USA.

The fellow who pissed in the water on Mt. Tabor was urinating on Chuckie Shumer, guaranteed.

When our congressional leader return after Labor Day...we need to get them to start procedures to get rid of the EPA....However the DEMOCRATIC PARTY PLANTATION with its idiot Overseers will protest....if they don't have a leash around your neck they are not happy....its time that we throw them down and put our booth on their necks....

The States must just say no to these ridiculous regulations. If they do, will the feds attempt to arrest the Governor and start the next civil war?