Gunwalker: Heard about the city officials in New Mexico who were smuggling guns to drug cartels in U.S. police cars?

Several city officials of the New Mexico border town of Columbus recently admitted they smuggled firearms and tactical gear to the La Linea drug cartel. And now, it turns out, that case may be linked to "Operation Fast and Furious", the malevolent Justice Department project that shipped thousands of murder weapons to Mexican drug gangs. 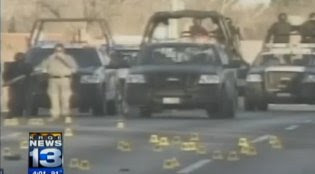 The Columbus gun smuggling case might be linked to a national case... The mayor, police chief and a trustee have all pled guilty to running guns to the Juarez drug cartel "La Linea".

At a hearing for police Chief Angelo Vega on Thursday, it was revealed that six of those weapons may be connected to "Operation Fast and Furious"[, ...] an ATF program that allowed thousands of guns to cross into Mexico so that federal agents could track them.

Now "Fast and Furious" is under investigation, because officials lost track of more than a third of the guns, many of which were linked to shootings.


Last month it was revealed that Columbus city officials were using the town's police cars and other equipment to run guns to the cartels. 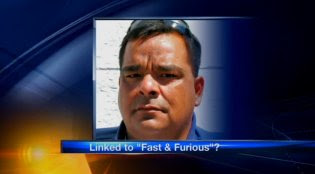 The former mayor of a New Mexico border town pleaded guilty to gun smuggling charges four months after he was arrested in a federal sting.

On Tuesday, Eddie Espinoza, 51, pleaded guilty to one count of conspiracy, three counts of making false statements, and three counts of smuggling firearms from the United States.

The guilty plea means the former mayor of the village of Columbus could face up to 50 years in a federal prison.

Federal documents state the group smuggled more than 200 guns from New Mexico to the streets of Cíudad Juárez and Palomas, Chihuahua. The documents further state that at times the group used unmarked police cars registered to Columbus to smuggle the guns across the border... the guns [were connected] to at least eight murders in those cities.


Gunwalker is a bigger scandal than Watergate. American law enforcement officials have been killed by the weapons smuggled to the drug cartels by a rogue Justice Department.

If we had a real media in this country, a firestorm of outrage would have already been ignited among the electorate. And the most partisan Attorney General in American history -- Eric Holder -- would be testifying every day in front of Congress.

Your priorities are screwed-up. Indian rosewood, now there's an issue that deserves some prosecution!
.

Ya but The Rule of Law is for us little people, like Hobbits and Tea Party Patriots.

But I'm repeating myself here, as the Dept. of Homeland Security, has classified white, and black, law abiding productive concerned Americans as terrorists.

My government is completely, irretrievably, out of control. It no longer represents me, my country, nor my Liberty. It is a monster, run and operated, by the worst scum humanity is capable of producing.

This article is a cross section of how corrupt, how morally bankrupt, how criminal in nature and act, how savage those in positions of power throughout the entire system are.
Of how far above the law and accountability government has become.

At every level, government has devolved into a mob, an organized crime syndicate in everything but name.

As for sure, if I was to perpetrate and or commit the transgressions and or crimes that have become normal and standard operating procedures of the elected and appointed figures in this country I would be spending my life behind the bars of a prison cell.

It is testimony to the magnitude of the cultural corruption permeating our system of government that in the first instance this egregious level of crime and immorality exists.

The lucid thought that comes to mind to all this is this can only be the tip of the iceberg. That if these are the ones who are caught or exposed, just how many tyrants crooks and thieves are getting away with things like this. Simply because they have gotten away with their crimes, and no less those who are the gate keepers are undoubtedly as guilty, or even more so of crimes and corruption as those apprehended.

But in every instance it is possible to foist on me and my law abiding fellow Americans, the very basis of Liberty, our 1st and second Amendment Liberties are reason to suspect and paint me as a criminal.
Because I only want to protect and defend what is my natural born freedoms and God given rights, which in every concept of Liberty are provided for circumstances as these crimes and treason committed against me by those in position of trust and power who have absolutely no intension nor belief in honoring such trust and Rule of Law.

No how insane is this I ask you my fellow American?

The criminals that inhabit and infest the Obama administration are indeed fully engaged in and committed to a broad-based program of outrageous conspiracy against the United States and its citizens.

Fully aided and abetted by news media; virtually all of news media.

There is no "openess" nor or is there candor or transparency of any kind, anywhere in this administration.

In the Obama administration, the only purpose of speech or communication is to deceive.

The "news media" never fails to assist this fundamental modus operandi of Alinsky; applied now by the prolific liar Obama.

However, the Obama administration is now recognized widely as a significant economic failure.

Obama can and must be removed, immediately if possible, by any and all legal measures; if we are to preserve Amerian cultural leadership, and economic and social success.

porcupinerim is horribly correct. I would add it is not only obama who has to be removed.
I can not imagine what must be the thinking of all who are complicit in these crimes and treason, but in no doubt there is no consideration for just how destructive their actions are for us Americans who live by the rule of law.
If these traitors and criminals can not honor and respect that rule of law, how can we as people be expected to stand idly by while everything we stand for and believe in is ruined?
Are these monsters so psychotic and misguided, are they so full of hubris and disdain as to think they are not going to be responsible and called to task for such high crimes and felonies?
There are mechanisms of Constitutional redress that sanction the use of the sovereign power of we the people in the advent of such tyranny and treason against us and our republic.
Will it be necessary for us as people, as Americans to have to resort to drastic measures of lawful redress of last resorts?
Are events so far out of control that the checks and balances of republican form of government inadequate to the task of preserving our very Liberty, the very existence of our Constitutional Republic? And ultimately our lives?
Because at the rate this treason tyranny and high crimes are escalating, what comes next as a result of such evil is the very lives of Americans who question such tyranny.
You can sense and interpret this very thing in the push back and utter arrogance of the people of power and privilege involved.
Threat of undue police state tactics and complete bypassing of due process of Habeas Corpus as an expedient method of quelling voices of dissent of such treason and tyranny is begun via a myriad of tactics in the escalating strategy of imposition of dictatorial government.

"The guilty plea means the former mayor of the village of Columbus could face up to 50 years in a federal prison". In other words, the current laws work when they are enforced...

Or course, the media would be forced to actually go to Columbus NM, which they do not want to do. I'm sure that the media would consider Columbus (or Deming, which is the nearest town of any significance), worse than Bush's ranch in Tx. Hot, dry and dusty, with nary a Starbucks and all the bars tend to have a bit rougher crowd. Not for the prissy journalists at CNN.

When it works Mr. Proof?
50 years?
Link to the below piece, information there on the plea bargaining going down tells just how deep the rabbit hole goes. A deal of reduced prison terms for keeping quiet about the connections of people and guns to Gunwalker.
In all likelihood these treasonous SOB's won't spend hardly a day behind bars when it all spins out.

Read Counts 23 and 24 of the indictment, on page 9 of 26 of the indictment, available here: http://www.kvia.com/download/2011/0311/27153928.pdf
In Count 23, On January 25, 2011, Federal Agent(s) watched as two suspects purchased a total of 20 American Tactical 9mm pistols from an FFL in New Mexico, drove with two more persons about 27.5 miles in about 32 minutes to an apartment in El Paso, TX. They stopped at a Kmart and bought a black backpack. They entered the apartment with the black backpack and the box containing the 20 pistols. Shortly two individuals exited the apartment, with the now-full black backpack and drove, with the black backpack, in an unmarked Ford F-150 police vehicle registered to the villiage of Columbus, TX to the El Paso bus station. (The bus station is less than 1/4 mile from the Santa Fe Bridge Border Crossing between El Paso and Juarez.

In count 24, on January 27, 2011, Federal Agents watched as a Honda Pilot with Chihuahua plates occupied by two of the men from the Jan 25 event and an unknown female pulled up to the apartment. Two men unloaded and carried into the apartment a large black suitcase. Two hours later, one of the men who had bought guns on Jan 25 exited the apartment, wheeled the large black suitcase to the unmarked Ford F-150 police vehicle registered to the villiage of Columbus, NM, and drove to the El Paso bus station. (Yup, the one less than 1/4 mile from the Santa Fe Bridge Border Crossing between El Paso and Juarez).

How do the statements made in those two counts in the indictment square with paragraph ten of the media story announcing the arrests and unsealing of the indictment (available here: http://www.kvia.com/news/27146962/detail.html )?
“As part of the investigation, every effort was made to seize firearms from defendants to prevent them from entering into Mexico, and no weapons were knowingly permitted to cross the border.”

How many opportunities did they have to interdict the firearms along the way?
How far from the border do they have to be when they avert their gaze to say they did not "knowingly" allow firearms to cross the border?

There is no indication that any of these 20 9 mm pistols were siezed or in any way accounted for. The activities reported in both counts 23 and 24 happened more than one month after the death of US Border Patrol Agent Brian A. Terry.

TO THE AGENT'S CREDIT: subsequent purchses by the defendants of 40 pistols WERE interdicted and siezed.