Time Magazine Nails It: The Cause of S&P's Downgrade of the U.S.

With their usual attention to detail, the crackerjack reporters at Time Magazine have finally discovered the root cause of S&P's downgrade of U.S. debt instruments. 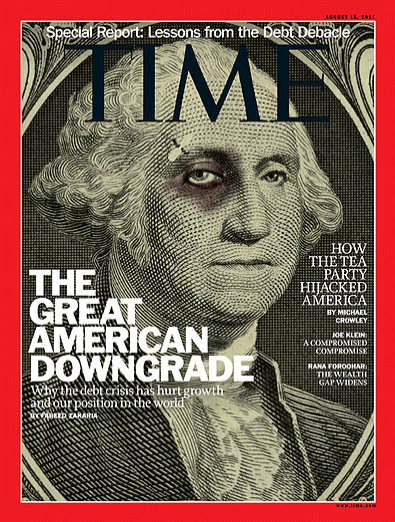 I'm glad they cleared that up, because I was truly confused.

So it wasn't a Democrat refusal to address entitlement reform. It wasn't the Democrats' repudiation of every single suggestion by the Obama "Deficit Commission". It wasn't a failure of the Democrat-controlled Senate and President Obama to proffer a budget for more than 800 days. Oh, and it wasn't a "one-time, emergency Stimulus", the most aggressive spending increase in world history, that is now built into the baseline budget.

It also wasn't a refusal to acknowledge the repeated failure of Keynesian economics. It wasn't passing the most expensive entitlement program ever -- Obamacare -- which passed in the dark of night so Americans could "find out what's in it". Furthermore, it wasn't a massive, command-and-control takeover of the financial industry -- Dodd-Frank -- with a bill so immense and complex that even today no one can predict exactly what it will do to banks and insurers.

And it certainly wasn't the thousands upon thousands of bureaucrats in the EPA, the Interior Department and the National Labor Relations Board, which are shuttering businesses large and small.

No, none of those things were responsible for the debt crisis and downgrade. This was: Thank goodness we still have true journalists at Time who are willing to cut through all of the clutter, confusion and misinformation to report upon the real culprits of the deficit debacle.

Is that real or did you make that up.

I can't (but I can) believe how biased that is.

There isn't any pretense any more.

Snark level reaching the red!!! But seriously, that guy with the poster looks kinda suspect...

A mercurial, smooth-talking bully with deep pockets brutalizes and batters one whom he used to woo, and what's the response from onlookers?

Liberalism truly is a mental disorder.