Although I'm sure Snookie would make a decent tenor:

Obama's Midwest tour last week prompted more criticism and ridicule than support on Twitter, according to this week’s Hill Hexagon.

Regardless of what President Obama and his political advisers had hoped for, the three-state Midwest bus tour last week prompted far more criticism and ridicule than support in Twitter comments, according to this week’s Hill Hexagon.

An analysis of Twitter traffic by Crimson Hexagon over the days of the tour showed that 72 percent of the opinions expressed were negative, while 22 percent were neutral and only 6 percent were favorable. 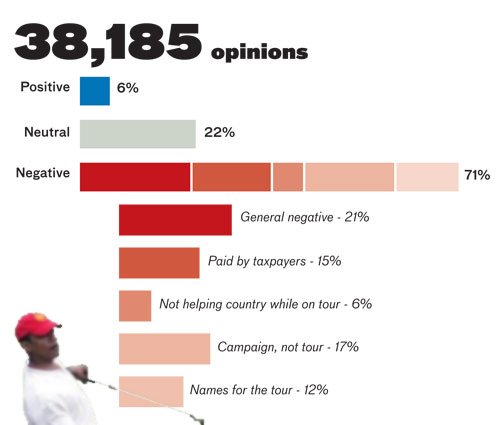 Neutral comments were primarily mentions of the stops he made on his tour and what he said and did while on it. The favorable reaction came along the lines that previous presidents have conducted similar tours and relief that Obama was making the case for his policies...


In related news, David Axelrod doubled the dosage of his blood pressure medication.