What do you call it when everything someone touches turns to excrement?

Turns out another half-a-billion dollars of your money was just flushed down the "green jobs" hole, the inevitable result of the relentless, climafraud, Soviet-style, central planning economic model of the Obama Democrats: 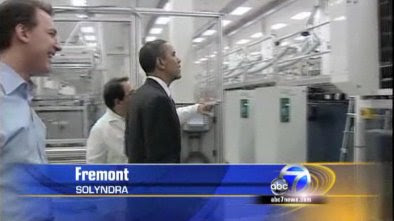 Solyndra, a San Francisco based solar panel company that received a $535 million loan guarantee from the federal government has declared bankruptcy. Last year President Obama touted the company as “leading the way” in the green jobs future he envisions.

Just a few months ago, ABC News revealed that one of the major financial backers for Solyndra is also a major donor to the Obama campaign... The donor, Steve Westley, has subsequently been named to the President’s Energy Advisory Board. Solyndra was supposed to have produced 4,000 jobs with the loan guarantee. Now all of the company’s employees have been laid-off. Mr. Westley is still on the advisory board.

Congressman Cliff Stearns, Chair of House Energy and Commerce Committee’s Oversight Subcomittee, released the following statement this afternoon: "In an apparent rush to push stimulus dollars out the door, the Obama Administration wasted $535 million in taxpayer funds in guaranteeing a loan to a firm that has proven to be unviable in the global market... For months, we have been investigating how and why nearly half a billion dollars in taxpayer money was committed to this financially troubled company."


When the final history of this administration is written, I predict that we will have seen the most wanton waste, fraud and abuse of the taxpayer in history; in fact, it will have been of a scale so epic and so unbelievably criminal in nature that Richard Nixon will look like George Washington in comparison.

What a waste of taxpayer money. There is no vetting of the green industries. There is no proof if is necessary. I understand the need to keep an eye on pollutants but this is getting f'ing ridiculus. The CERN lab jsut came out with a report that points the finger at the sun as being the reason for all our so called global warming issues...