Oh, My: Obama's Agriculture Secretary Tom Vilsack Says Giving Away Food-stamps Is a Stimulus Program Which Puts People Back to Work

One in seven Americans (another Obama record!) is now on food stamps. Asked how the federal government might alleviate those high numbers, Obama Agriculture Secretary Tom Vilsack proclaimed that food stamps are "putting people to work".

Well, obviously, it's putting people to work. Which is why we're going to have some interesting things in the course of the forum this morning. Later this morning, we're going have a press conference with Secretary Mavis and Secretary Chu to announce something that's never happened in this country -- something that we think is exciting in terms of job growth... 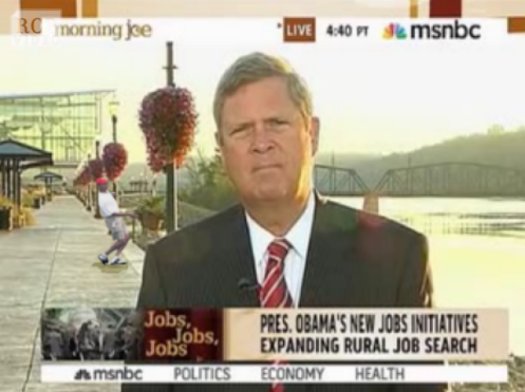 ...I should point out, when you talk about the SNAP program or the food stamp program, you have to recognize that it's also an economic stimulus. Every dollar of SNAP benefits generates $1.84 in the economy in terms of economic activity. If people are able to buy a little more in the grocery store, someone has to stock it, package it, shelve it, process it, ship it. All of those are jobs. It's the most direct stimulus you can get in the economy during these tough times.


Bask in the sheer genius of Tom Vilsack, peons: the government taking money from you hard-working Americans -- and giving it to others, without regard for their ability to work -- stimulates the economy!

Why didn't we think of this before?

In fact, let's put everyone in America on food-stamps! That'll be the ultimate Stimulus!

As an aside, my fellow Tea Party terrorists, Vilsack's wife is running against Rep. Steve King of Iowa, a true fiscal conservative.

Do we need another economic illiterate in Congress? I think not. Therefore I urge you to give $5, $10, whatever you can spare to Steve King's campaign.

We need exactly zero Vilsacks in office in 2012.

Funny, were in not so sad.

Steve King is definitely the man! After redistricting in Iowa, he will be my representative. You can bet I will be doing everything I can to help him get re-elected.

He was the governor of Iowa, the one who tried to nearly ban guns and allow those with a criminal record automatic return of federal rights while flooding the state with what Chicago and Peoria, Ill. were dumping out of their housing projects. Yes, he and the dolt Chut (Chet Culver, as I called him) is part of the reason I deserted that state. Go figure.