GRAPHIC: What Your Beer Says About Your Politics 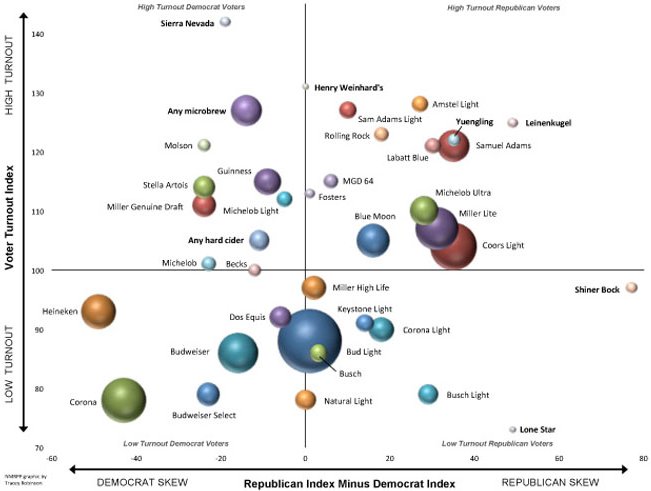 Americans who most often drink Dos Equis are in the middle-of-the-road while drinkers of Heineken's flagship brand are strongly Democratic. Samuel Adams drinkers are strongly Republican, and more likely to vote.

Beer has a long and storied place in American presidential history and politics.

George Washington famously brewed it. James Madison purportedly sought to create a cabinet-level Secretary of Beer. And Franklin Delano Roosevelt helped make it legal to produce and sell (again) by championing legislation repealing Prohibition. Upon signing the bill, he reportedly said, "I think this would be a good time for a beer."

at 7:05 PM
Email ThisBlogThis!Share to TwitterShare to FacebookShare to Pinterest
Labels: Water-cooler

We need to see the whiskey chart!

When I'm at The Boogie Southern Compound, I drink both Yuengling and Bud light. That has a LOT more to do with geography than preference.

At Boogie North, I tend to drink LaBatt's and Beers by Bell's Brewery

Miller High Life is my preference, but I wonder at the exclusion of O.E. 800, Colt 45, and Hefenreffer Private Stock.

Also, I'm guessing the D-side on all of those, but then, most of those who partake in such fine malt liquors are not likely to participate in online polls.

My apologies: that cliche still exists in the 'hood, but now the mainstream, in light of Pigford, Pigford II, a confetti-rain of "free" EBT cards, and a culture of rot, decay, and decadence, is actually into high-end, very expensive liquor.

And Yukons, Escalades, and gold-rimmed Bugattis.

This chart is for the kulaks.

Anchor Steam outclasses many choices on the right. I'd forgotten about Haffenreffer but it is a malt. A shame to lump micro brews into a bubble when a good coffee beer can stand on its own.

...where are the malt liquors?

MAJOR FAIL! I drink Harpoon IPA, or any IPA. My research confirms that all IPA drinkers are strongly Conservative/Libertarian and vote often and early!