3 CHARTS: The astonishing collapse of employment in America

At Real Clear Politics, Nicholas Eberstadt cuts through the media nonsense and politicians' fables and describes an economy that is still reeling from the mortgage meltdown.

...There is no way to sugarcoat it: the [employment] situation here is basically a disaster, a crisis far worse than most commentators and policymakers seem to recognize, and with no clear prospects for appreciable improvement over the near-term horizon. Simply put, work in America has in large measure collapsed-and a recovery worthy of the name is nowhere in sight.

...The official yardstick almost always used in assessing joblessness in America is the civilian unemployment rate, which tracks the overall percentage of workers and job-seekers without work. This may sound like a reasonable way to gauge joblessness, and the official unemployment rate does indeed have its uses. But as a practical matter this statistical tool seriously disguises and understates the magnitude of the ongoing jobs crisis.

According to the conventional unemployment rate, 7.6 percent of the country's civilian labor force was out of work last month (June 2013). While this is hardly a ‘good' number, these official figures suggest the jobs market is on a slow but steady rebound, gradually improving since early 2010, when the national rate was nearly 10%. According to those same numbers, current levels of joblessness are bad but by no means unprecedented: the official unemployment rate, after all, was above 7.6 percent at times in the 1970s, the 1980s, and (briefly) even in the 1990s... 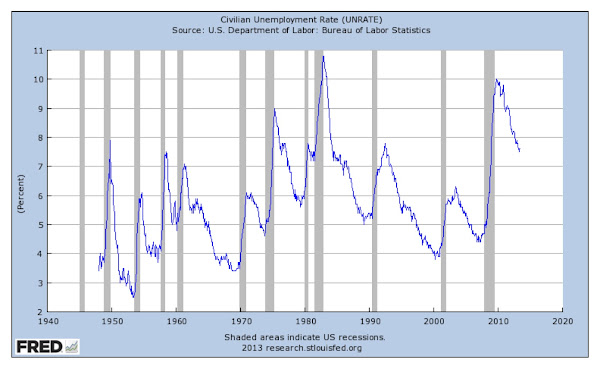 ...[But a] more basic and intuitively meaningful sense of how the jobs market is performing in this respect comes from the employment-to-population ratio (or simply the "employment ratio") for adult men and women.

When we look at these numbers, we get a very different picture of labor market conditions in America. By these numbers, there has been no "recovery" whatever in the jobs market since the Great Recession. Quite the contrary: the employment ratio today appears to be stuck at the same awful level recorded in early 2010-the worst level for more than a generation... 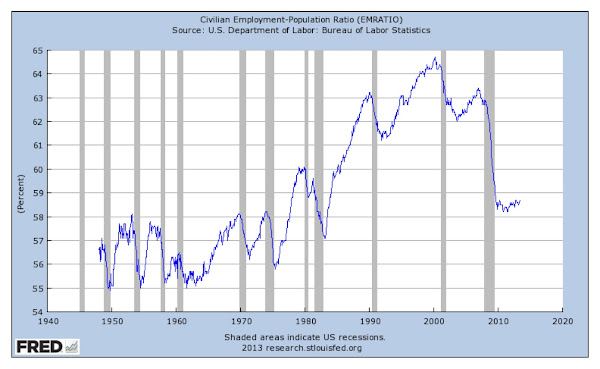 ...And bad as all of this sounds, the true situation is if possible even worse-for the civilian employment ratio conflate trends for men and women. Broadly speaking, paid employment has been on the rise for women ever since Washington started keeping detailed numbers on the phenomenon back in the late 1940s-a reflection, and in turn a driver, of the big changes in the status of women underway in the postwar era...

...[But] the male employment ratio reached its peak in the early 1950s-and then commenced an almost relentless descent... How is this collapse of work to be explained? ... Over the past 60 years, the labor force participation rate for adult men has fallen by about 16 percentage points. In 1953, about 14 percent of adult men were out of the labor force-around one in seven. Today 30 percent are neither working nor seeking work-nearly one in three.

...The plain fact is that men in what are generally regarded as conventional working ages have been increasingly opting out of the workforce altogether. This arresting fact is brought home in Figure 4, which tracks employment ratios and labor force participation ratios for men 25 to 54-prime years of working life... 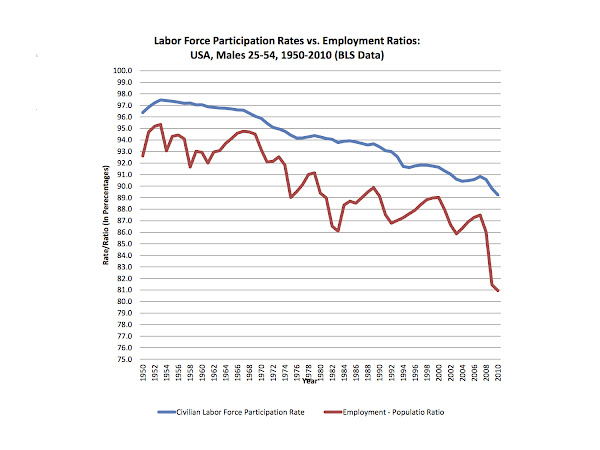 ...it is apparent that there has been a major behavioral change in America, wherein a growing proportion of working-age Americans are checking out of paid labor altogether. Suffice it to say that not working at all is neither unthinkable nor unaffordable these days, even for adults in the prime of life. This too is a problem-a huge problem, one that has been gathering for decades, and one must unlikely to be undone by recourse to standard-issue Keynesian tools.

More than three years ago, then-House Speaker Nancy Pelosi claimed Obamacare was a "jobs bill" and that it would create four million new jobs.

Just like every other pledge related to Obamacare, Pelosi's statement was a blatant lie.

Under the current administration, the entire federal government appears devoted to encouraging dependence on government. Reversing course on the Democrats' failed "War on Poverty" will happen, one way or another, once the money runs out.

The thing is, if it is targeted, it's a good thing. The fewer women working, the higher chances that they will marry and have children. It's the only thing they can actually add to an economy, the rest is something literally any one else could do only it precludes growth through a strong work force. Actually, it weakens the work force, making it both more expensive and less productive. That's the only way out of the decline, if it isn't an easy or quick fix even so. Heck, at this point, it isn't even sure. America may simply be done from demographic collapse. Only time will tell. Watch Russia for an example. They will be sharia in a decade or two, max.

Thanks for sharing this great content, I really enjoyed the insign you bring to the topic, awesome stuff!
Estetik