I can only interpret this report as follows: the Obama-Holder Justice Department helped to foment race riots ahead of the prosecution (and probable acquittal) of an innocent man. And for the race-obsessed Leftists reading along, that man just happens to be part Hispanic, part White and part Black. 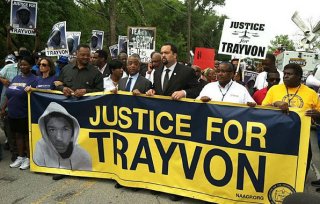 Judicial Watch announced today that it has obtained documents in response to local, state, and federal records requests revealing that a little-known unit of the Department of Justice (DOJ), the Community Relations Service (CRS), was deployed to Sanford, FL, following the Trayvon Martin shooting to help organize and manage rallies and protests against George Zimmerman...

...Set up under the Civil Rights Act of 1964, the DOJ’s CRS, the employees of which are required by law to “conduct their activities in confidence,” reportedly has greatly expanded its role under President Barack Obama. Though the agency claims to use “impartial mediation practices and conflict resolution procedures,” press reports along with the documents obtained by Judicial Watch suggest that the unit deployed to Sanford, FL, took an active role in working with those demanding the prosecution of Zimmerman.

Recall that President Obama also weighed in on the case on the side of Martin well before any guilt or innocence could have been established. 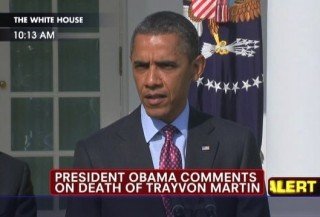 That murder charges were filed anyway is probably at least in part due to the incalculably irresponsible decision by Obama to involve himself in a local murder case. After the local police chief said there was no reason to doubt Zimmerman’s version of events and murder charges weren’t filed, protests erupted, the Justice Department decided to launch its own investigation, and Obama testily asserted, ”If I had a son, he’d look like Trayvon.”

Obama, supposed Constitutional scholar, is apparently not aware that justice must be color blind. The moment Zimmerman is declared innocent, Obama must be ready to take to the same Rose Garden where he made his earlier Trayvon and me statement and recommit himself to the notion that we live in a nation where due process, and not lynch mobs, are the rule. He should ask for calm, declare that justice has been done, and be prepared to back up local efforts to stem riots in Sanford – and, God forbid, around the country – with a forceful federal law enforcement response.

Recall that during the time the Holder DOJ was fomenting unrest on your dime, the professional cadre of rabble-rousing race hustlers were also doing their own damage.

“We live in the middle of an American paradox,” Rev. Al Sharpton, attending the rally, told the crowd. “We can put a black man in the White House but we cannot walk a black child through a gated neighborhood. We are not selling out, bowing out or backing down until there is justice for Trayvon.” ... Sharpton has vowed to call for an escalation of civil disobedience of Zimmerman is not arrested.

The Obama-Holder Justice Department is a disgrace. And the Republicans who helped confirm Holder, who now call for his resignation after a series of epic scandals, are doubly disgraceful.

This EXACTLY why we need to purge the GOP of the corrupt, spineless hacks running it.

This alone is grounds for impeachment of both Obama, and Holder. Holder's impeachment would be a breeze.

Instead, they twiddle their thumbs and stab everyone in the base of the GOP in their backs.

Let's make sure the verdict is written in long hand then refuse to translate it for black people.
Problem solved.

So how many of you have contacted your electeds about this? Don't be as complicit as they have been.

The founders would be weeping.