Next time you see one of the climate kooks opposed to Keystone XL, be sure to thank them for the train derailment and explosion in Quebec that has resulted in an environmental disaster.

Five bodies have been found and about 40 people are still unaccounted for in the Saturday morning derailment of a runaway train that may have reached speed of up to 90 kilometres an hour.

Hampered by heat from the charred tankers, search crews hoped to expand their small safety zone over the course of the day and begin what could be a long process of examination and identification that could finally bring anguished families some closure. 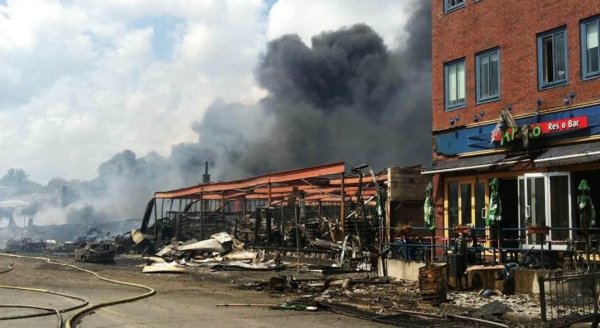 A few of the nearly 2,000 people evacuated have been allowed back home but the entire town remains under a “boil water” order from the Quebec environment ministry...

...Booms on the Chaudière were installed to hold back some of the ocean of oil that gushed from exploding tankers. Each tanker on the 72-car freight train was carrying 100 tons of crude oil, the ministry said.

Yes: the train was carrying oil. Walter Russell Mead explains the ramifications of the Obama administration's refusal to approve the Keystone XL pipeline.

...crashes like this are why greens should be supporting the proposed Keystone XL pipeline. 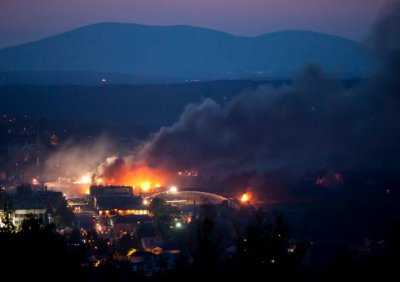 Canada has a lot of oil. Much of that is trapped in Alberta’s oil sands, and it is of a particularly heavy and dirty-burning variety. But Canada does not have a lot of oil infrastructure. It lacks the pipelines and the refineries needed to take advantage of its bounty.

The proposed Keystone XL pipeline would solve this problem by bringing Canadian oil down to American refineries along the Gulf Coast. Prominent greens like James Hanson and Bill McKibben see the approval of this pipeline as “game over” for the climate, due to the amount of greenhouse gas this oil would emit when burned.

Here’s why they’re wrong: that oil is coming out of the ground whether the pipeline is built or not... lacking any proper pipeline infrastructure, companies are shipping oil by train. And not in trickles, either: Canada’s rail shipments of oil have increased by 28,000 percent since 2009.

...If greens had any sense, they would be clamoring for the Obama administration to approve [Keystone XL]. The oil is coming out whether the pipeline is built or not. At this point, it’s about minimizing the risk of events like the Lac Megantic accident.

Let me repeat for the slow-to-learn Democrat readers among us: that oil is coming out of the ground whether the pipeline is built or not. Which would make refusal to approve said pipeline not only economically suicidal but also environmentally irresponsible.

Unfortunately, arguing that a pipeline is many times safer than rail or road transport will not work with "Eco-tards": As they view oil/coal/nukes as inherently risky and/or dirty they will never accept any solution unless it completely eliminates all risk.

Your homework assignment is to investigate the ownership of the railroads carrying the majority of this oil.

I would wager that a certain Warren Buffet has his fingerprints or retinal scan all over this.....

The real ecoterrorist don't care about human life and suffering or the well being of society. All of the things that have pulled people out of poverty and raised standards of living are what they hate. If we lived in caves and didn't kill any animals or better still just died off they would be happy. Obama said it quite plainly to an African audience. If you start driving cars the planet will burn up. (I paraphrase). So he doesn't want Africans to have a society of prosperity where they can afford a car. These people are sick and the elites like Obama and Gore are also greedily using the lie of global warming to enrich themselves.

Somehow, I think Islamists were involved in this.

Killing is also an Islamist joy.

Bloodthirsty or blood lust is a mental condition that Islam seems to produce in its followers.

A reputable Washington source has placed the blame on Reardon Metal.

Indeed, pipelines are the preferred method to transport oil long distances for both economic and safety reasons.

However, rail is not THAT dangerous. Pipelines also rupture and kill many each year but few outside the local scene hear of the deaths. (At least gas pipelines kill to my direct knowledge; oil pipes burst too.)

It is a fallacious argument to demand PERFECT safety from any energy enterprise, even farming.