BOOM: Johnny Boehner will have a primary opponent!

Now this is something all Americans can get behind:

BUTLER COUNTY [OH] — Anyone with aspirations to be a countywide officeholder has until Wednesday to be on the partisan primary ballots on May 6... 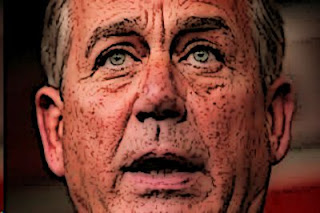 ...The most petition[s] filed have been for Ohio’s 8th Congressional District, currently held by Speaker of the House John Boehner. The district encompasses all of Butler, Clark, Darke, Miami and Preble counties and the southernmost part of Mercer County.

Boehner is guaranteed to have one primary opponent in West Chester Twp. businessman Eric Gurr, who lives in Liberty Twp. There could be at least two other Republicans on this primary ballot in Liberty Twp. resident Matthew Ashworth and Troy resident J.D. Winteregg, who have filed but the elections board has yet to certify their petitions.

Greenville resident Matthew Guyette, who is certified to be on the Democratic ballot for the 8th Congressional District, looks to be facing Miami University professor Tom Poetter, who has filed his petitions but they have not yet been certified.

A while back I proposed a "nuclear option" for dealing with John Boehner, which Mark Levin was kind enough to publicize.

Before we resort to that, I'll be tracking the primary process in OH-8. We may in fact have a credible way to replace the feckless, cowardly and mumble-mouthed Speaker without resorting to nukes.

I'm not sure the people in Ohio are smart enough to vote out crybaby Boehner. After all, they helped re elect Obama. People like Boehner, Mc Cain, Graham, King,and Mc Connell are the reason I left the Republican party years ago. But, I hear Boehner is about ready to call it quits very soon, so he can take a payback job with some Chamber of Commerce company. At that point he'll no longer have police protection, and will have to face the public eye, to eye. Won't that be interesting.

Debra, I will give an update as soon as the primary certification is done on Wed. I've heard good things about Mr. Winteregg through Tea Party contacts in Ohio.

Check back later in the week!

Doug, I totally agree. These RINOs in positions of power can do more harm, twisting arms behind the scenes, than a freshman democrat could ever do.

It is not only time to attack these sell-outs with the same fervor as with liberal politicians, it is time to come out against the RINO blogs that push these losers as viciously as if the liberal media.

It has come down to that...

I'm asking for help. There is a way to save our country from amnesty, but we have to mobilize quickly. Amnesty likely means the end of our country. We have to decide whether we want to fight now in the next few days, while we still have a chance, or fight later when we are boot heeled against the floor and it's too late.
At this point it's all or none, so there are no boundaries on the coercion involved, there is nothing to lose at this point. In a sense we are free. And in reality we don't have to go to war or physically protest for that matter so it's not a matter of extreme sacrifice, but it is important to realize that we act now, not tomorrow and that we have to gear up as patriots. The RINOs are alone responsible for the extremist, absolute nature of our petition and actions. We can quickly organize and set up a powerful alliance using the internet. There is no vehicle set up to directly penalize the RINO's, no threat that they will fear so we have to construct one. A petition can be sent to all GOP members of the house in a matter of days. Here is the key threat and likely the only one that will put any fear into them along with some lesser threats:
A vote for amnesty will cause you as a Republican to cross party lines and vote for their democratic opponent. (Since they appear to want us to commit suicide we want to make sure that there's a very good chance they will join us in the suicide party they are throwing, even in solidly red districts. It doesn't take many disgusted people crossing over to change many elections.)
The other suggested threats that can be checked as an option in the petition: It will state if they vote for amnesty, there will be a primary challenge and you will vote against any front runner in the primary, but if they win in the primary you will do two things: Help to get a third party conservative candidate running against them and swear to vote for the democrat, regardless, in a simple act of vengeance to make sure. And that they will remain unforgiven for this treasonous act and will never get your vote in the future for any office.
It will also state as an option that you may not be a deep pocket donor but you will not donate money to any Republican candidate until after the 2016 elections and you are going to make every attempt to influence your vast coterie of conservative friends to do so as well, and another option that you will have a waning interest in politics, particularly when it comes to the GOP. That you might send money to democratic representatives facing Republicans who were prominent in promoting amnesty.
It will state as an option that you plan in participating in setting up a third party since as they are not interested in representing me as a constituent and run candidates against the GOP. There is no way that you will win the presidency in 2016 because we will run a viable, conservative, third party candidate.
Let's not go down without a fight or do things that are pointless and ineffective. We know who and where the point of attack is.
I'm not tech savy nor do I have a working method to influence politics, but I do know there is no mechanism right now for people to effectively block amnesty and the only people who want and can change this appear to be the "silent majority" who see themselves without leverage, who only need a definite plan of attack to get motivated, something they see as effective.
If someone can help me put up a petition or web space, I'll write the petition for people to sign. We could make this go viral. Also advice on how to best impact the representatives or other tacks that may be effective with politicians would be appreciated. Email me with help.