For those leftists, progressives, and other miscreants who believe that an open border policy is humane, please consider this report by Óscar Martínez:

It was February 2007 when 300 people had disappeared from a town called Altar.

All were Mexican and Central American migrants who were concentrated in this town of Sonora, bordering Arizona, waiting to find a opportunity, where they could enter the United States. 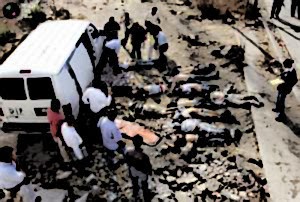 The narcos, omnipotent narcos, kidnap migrants from Altar heading to the crossing points. Altar is 100 kilometers from the border, but it is the town where the migrants gather supplies before heading towards the unforgiving desert, which can be so cold that it burns or so hot that it burns.

After gathering hoodies, coats, gloves, hats, those who attempt to battle the desert travel 100 kilometers of dirt road between Altar and El Sasabe to reach the border and choose a location where they will attempt to pass. Locations with names such as, el poste verde, el carro quemado, el cerrito (green pole, burning car, little mountain).

It was in that stretch of land, controlled by “Halcones” (narco lookouts), that the migrants were taken from the trucks that were transporting them to El Sasabe.

Some 15 trucks had been detained and all - drivers, coyotes, and migrants - had been kidnapped and taken to a nearby ranch. There, at the ranch, many were tortured. Some of the migrants had their ankles shattered as a punishment for those who were attempting to walk in the desert.

I was in Altar when the kidnappings occurred. When I asked taxi drivers and drivers of vans why there was so much cruelty, kidnappings with no ransom requests, his response was simple and unanimous: the narcos were dispatching "mules" and they did not want migrants wandering around because they bring "heat" to the area.

The "burreros" are men - teenagers mostly - working as drug mules. They carry 20 kilograms of marijuana on their backs and are released into the desert, with the guidance of a coyote and trusted operative of the local kingpin.

They walk two nights through the desert of Arizona, until they reach the U.S. base, the Indian reserves of the Tohono, an autonomous territory within the United States. From there, the drugs are transferred onto trucks that will travel by road to the cities of distribution.

When narcos are going to transport an important load of marijuana, they don't want migrants wandering the desert. Migrants attract the attention of the border patrol, and that generates losses for narcos. And narcos hate losing. That is why they want the desert to themselves. For this reason, that terrible February, about 300 migrants were kidnapped.

Open borders breeds Balkanization and multi-linguism, ingredients for civil war as evidenced in Croatia and today in the Ukraine.

Open borders is anything but humane. Such a policy represents a crime against the American people. Remember in November.