Leadership: The pontificate of John Paul II withstood the onslaught of secularism, liberation theology, totalitarianism, even an assassination attempt, and provided a moral compass to a world increasingly adrift. 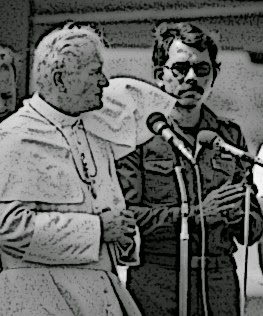 It is said the late Soviet dictator Josef Stalin once dismissed the power of the papacy by asking, "The pope, how many divisions has he got?" But if any pope has shown how much influence a leader can have without an army, it has been this one.

Karol Wojtyla became a priest during the darkest days of the Nazi occupation of Poland, entering a seminary in 1942, an act that risked his very life. Like the first Christians in Rome, he was motivated by faith in a power he believed higher than any on Earth. Having lived under both Nazi and Communist tyranny, he had little tolerance for those who believed mankind could lift itself up.

He rejected "liberation theology" as an attempt to turn religion into a Marxist tool. In April 1990, he said in Prague "the claim to build a world without God has been shown to be an illusion."

In a 1983 visit to Nicaragua, Daniel Ortega's Sandinistas, accustomed to weak and corruptible Catholic leaders, attempted to turn a religious service into a Communist pep rally.

The pope, in effect, told Ortega to shut up and stop desecrating the Mass.

The pope's epic June 1979 pilgrimage to his homeland were nine days that literally changed the world.

In over 40 sermons, lectures and public addresses, John Paul II reminded his countrymen of their history, their culture, and their faith. He rekindled the spirit of a nation that had once nearly disappeared from the maps of Europe.

He created a revolution of conscience that 14 months later would produce the nonviolent Solidarity movement. Two more visits, in 1983 and 1987, and freedom's flame in Eastern Europe was lit.

Gorbachev himself acknowledged John Paul II's role in the fall of communism. "What has happened in Eastern Europe in recent years," he told the Italian journal La Stampa in 1992 "would not have been possible without the presence of this pope."

Pope John Paul II could reject communism without being an apologist for capitalism. In 1993, at World Youth Day in Colorado, he told half a million youths America was too materialistic and selfish. He resisted calls to "modernize" the church, to make it more "popular" and "appealing."

He never wavered from his faith in a "culture of life." He was attacked for opposing artificial birth control and the ordination of women, and his belief that homosexual acts are sinful. He believed some truths were eternal -- and that faith in those truths could transform individual lives and human society.

Even his critics acknowledge that Pope John Paul II has revitalized the world's oldest Christian Church and made it relevant in a world where the lure of moral relativism is strong.

Together with Ronald Reagan and Margaret Thatcher he helped consign the "evil empire" to Reagan's "ash heap" of history without moving a single division across a single border. History will record that this pope, with his anti-communist allies, helped engineer communism's collapse.

As President Reagan would have said, he has made a difference. All in all, not bad. Not bad at all.

I'm sure catholics will be pleased to read & remember this former pope.