COLLUSION: Oversight's Elijah Cummings (D) Collaborated With IRS to Target Conservatives Then Lied About It

New IRS emails released by the House Oversight Committee show staff working for Democratic Ranking Member Elijah Cummings communicated with the IRS multiple times between 2012 and 2013 about voter fraud prevention group True the Vote. True the Vote was targeted by the IRS after applying for tax exempt status more than two years ago. Further, information shows the IRS and Cummings' staff asked for nearly identical information from True the Vote President Catherine Engelbrecht about her organization, indicating coordination and improper sharing of confidential taxpayer information. 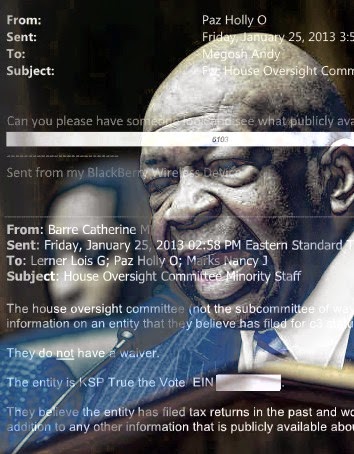 Chairman of the House Oversight Committee Darrell Issa, along with five Subcommittee Chairmen are demanding Cummings provide an explanation for the staff inquiries to the IRS about True the Vote and for his denial that his staff ever contacted the IRS about the group.


“Although you have previously denied that your staff made inquiries to the IRS about conservative organization True the Vote that may have led to additional agency scrutiny, communication records between your staff and IRS officials – which you did not disclose to Majority Members or staff – indicates otherwise,” the letter to Cummings states. “As the Committee is scheduled to consider a resolution holding Ms. Lerner, a participant in responding to your communications that you failed to disclose, in contempt of Congress, you have an obligation to fully explain your staff’s undisclosed contacts with the IRS.”


...Up until this point, Rep. Cummings has denied his staff ever contacted the IRS about True the Vote and their activities during Oversight hearings. In fact, on February 6, 2014 during a Subcommittee hearing where Engelbrecht testified, Cummings vehemently denied having any contact or coordination in targeting True the Vote when attorney Cleta Mitchell, who is representing the group, indicated staff on the Committee had been involved in communication with the IRS...

Issa has gone so far as to accuse Cummings of instigating the partisan witch-hunt against True the Vote.

In February 2012, Engelbrecht’s True the Vote received a letter from the IRS requesting more information about the group; one of Cummings’s letters, which Engelbrecht received in October 2012, contained questions that closely mirrored those posed by the IRS. Issa details them in his letter, strongly implying that Cummings based his letter on the one Engelbrecht had already received from the agency: Both requested information about the software True the Vote was using for voter registration, about the process the group used to train its employees, and about the vendors it used to obtain voter lists.

True the Vote’s lawyer, Cleta Mitchell, raised the prospect that the minority staff had exchanged information with the IRS at a hearing in February. “We want to get to the bottom of how these coincidences happened,” Mitchell said, “and we’re trying to figure out whether any — if there was any staff on this committee that might have been involved in putting True the Vote on the radar screen of some of these federal agencies.” Cummings said in response that Mitchell’s tacit allegation was “absolutely incorrect and not true.”

No wonder Cummings has been so anxious to suppress the investigation: he's been intimately involved with the scandal.

Cummings should be censured and removed from the committee. Of course, knowing the cowardly leaders of the GOP, they'll moan "it's a sad day", and do nothing.

Based on my notes, Democrats have succeeded in hitting the trifecta of government corruption. We have a lawless President, a lawless Attorney General, and a lawless House Oversight Committee Ranking Member.

These people need to be dispatched in November and held to account. Talk to your family members, your friends and your colleagues. We have a rogue government; it can not stand if this country is to survive.

Cummings is the representative to Maryland's 7th District, which is in Baltimore and is 95% black. There is no chance that he'll lose his bid for re-election. Sadly, this goes for numerous members of Congress.

This is how we end up with self-absorbed morons like Sheila Jackson-Lee, Maxine Waters, Alan Grayson and Hank Johnson (to name a few) in the House of Representatives.