YEP, IT'S A GLOBAL EMERGENCY: Sierra Club Directors Drive Around in Gas-Guzzling Jaguars 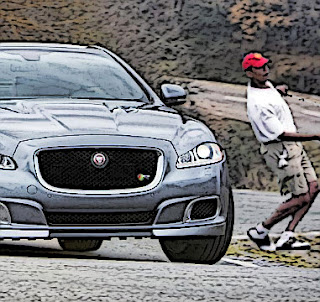 Members of the Sierra Club’s board of directors are driving around in gas-guzzling vehicles, despite the group’s support for the Obama administration’s increased fuel efficiency standards.

The Sierra Club strongly supported the Obama administration’s increase in minimum fuel economy standards to 54.4 miles per gallon (mpg) by 2025, but it seems the Club’s top officials don’t practice what they preach.

The Sierra Club’s 15-member board of directors own a combined 32 vehicles, less than one-fifth of which are hybrids or electric vehicles. Seven of the 32 vehicles are sports utility vehicles...

These people think we're stupid. They sit in their air-conditioned office buildings; they jet around the world; and they drive luxury automobiles all powered by fossil fuels.

They don't give a crap about the environment. They're Marxist low-lifes, bent on control.

This is unfair to Jaguar
Jaguar/Landrover is one of the most ecologically responsible auto manufacturers. But are not a bunch of tree huggers. Why did you single out Jaguar for the headline?

Because it fits his narrative. Its just smoke and mirrors to try and deflect from the damage caused by the right and big oil. The right feels their world slipping away. In a years time amnesty will pass and in 2yrs time Hillary will be president. Then we can crush the 1% and big oil and gun nuts.

Regardless of the car owned and/or driven, it is hypocrisy. The Sierra Club was "ALL ON BOARD" back in 2009 re: minimum required MPG output standards being raised from I believe 27 mpg to around the mid 30's proposed by Obama Administration. If an organization touts such environmental conscience reg's, legislation and the the like in order to help the environment and get of "BIG OIL" then they should lead by example.

@ZipFan - if you advocate 54MPG for the peons, you ought to get at least that for yourself. Otherwise, you're a Marxist elitist, but I repeat myself.

Oh, and when it comes to guns: MOLON LABE.