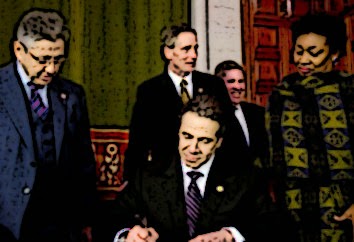 A newly filed lawsuit claims that the registration process under New York’s SAFE Act allows police to search a gun owner’s home without a warrant, seize their weapons, and not be subject to review.

Lawyers representing Gabriel Razzano claim the process is a violation of the Fourth Amendment which prohibits unreasonable searches and seizures and requires any warrant to be judicially sanctioned and supported by probable cause.

The registration process, according to the summons, is secretive and “results in a mandatory, warrantless Penal Law 400 gun removal visit from police.”

The lawyers claim that these warrantless police searches are “the real purpose of the SAFE Act.”

Under the SAFE Act, the New York Department of Criminal Justice (NYDCJ), the overseer of the database, may declare a person ineligible to own or possess a weapon without any type of judicial process.

Furthermore, the suit argues that if the NYDCJ declares a person ineligible, “such a determination makes the person vulnerable to imminent seizure of all weapons, without a hearing or even an arrest warrant.”

The attorneys indicate the state is creating a separate database from the federal NICS database but does not have the NICS protections, such as an appeals process.

Supporters of the lawsuit claim that the SAFE Act also violates the Second, Fifth, and Fourteenth amendments.

Razzano has been involved in a previous lawsuit involving the illegal removal of firearms from his home. In 2008, Rep. Carolyn McCarthy (D-Brooklyn) made a 911 call about Razzano resulting in a raid of his home, the loss of his pistol license, and the seizure of his lawfully owned rifles and shotguns. In this instance, the court ruled in favor of Razzano, citing his Fourth Amendment rights.

A deadline for registration under the SAFE Act is approaching in mid-April, but thousands have already vowed to not comply.

Adam Brainard, a lieutenant for the Greene County Sheriff’s Office urged gun owners to comply with the law first and sort out the constitutionality later.

“We’re not going to be going knocking on doors things like that obviously,” he assured.

Perhaps this lawsuit will have people thinking twice about the sincerity of such a statement.

Read more at The Mental Recession