A needless tragedy in North Carolina as a woman involved in a single-car crash perished when her "Smart" Car repeatedly rolled over. 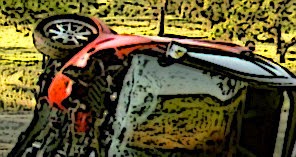 A Charlotte woman died Thursday when her 2013 Smart Car ran off N.C. 130 in Robeson County and flipped over, the Highway Patrol said.

The wreck happened at 11:41 a.m. about 6 miles west of Fairmont near Stuarts Mill Road, according to a report filed by Trooper M.J. Connor.

[The female driver] was traveling east on N.C. 130 when the car entered a curve and ran off the right side of the road, the report said.

The car, a convertible, hit a highway sign, rolled over and landed on its top... [the driver], who was wearing a seat belt, was pronounced dead at the scene, the report said.

These tiny demi-cars are dangerous simply because they do not possess the size or weight to survive serious impacts with conventional vehicles.

They are the product of government intervention, beginning in 1975, when Congress first authorized CAFE standards ostensibly to "save fuel."

As Deroy Murdock observes, "In a crash, most drivers would trade lower MPG for protective layers of thick steel."

J.R. Dunn lays out the casualties of the green death merchants. 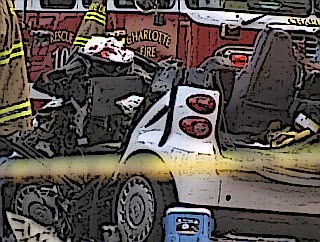 According to the Brookings Institution, a 500-lb weight reduction of the average car increased annual highway fatalities by 2,200-3,900 and serious injuries by 11,000 to 19,500 per year. USA Today found that 7,700 deaths occurred for every mile per gallon gained in fuel economy standards. Smaller cars accounted for up to 12,144 deaths in 1997, 37% of all vehicle fatalities for that year.

How many deaths have resulted? Depending on which study you choose, the total ranges from 41,600 to 124,800. To that figure we can add between 352,000 and 624,000 people suffering serious injuries, including being crippled for life. In the past thirty years, fuel standards have become one of the major causes of death and misery in the United States — and one almost completely attributable to human stupidity and shortsightedness.

When it comes to exploiting a tragedy to push gun control, the progressives screech, "It's worth it, if we can only save one child!"

How about saving the thousands of men, women and children each year, sentenced to death or horrific injury by insane, useless standards mandated by the government?

Americans need to wake up. The only way the companies can meet the mileage requirements is to build smaller, lighter cars. These lighter cars will result in many more Americans dying or being seriously injured -- just to meet the Progressive's gas per mile requirements.

These are acceptable casualties, in fact, with the absence of angry women trotting dead bodies around and yammering about "the children" I can accept much higher numbers. What these smart cars really need is a much larger Dole light, bigger 6 side air bags, collision sensors, side view video cameras, more sophisticated black boxes for data recovery, smart phone cancellation when moving, blow tubes to keep alcoholics out of the driver's seat, and break-away steering wheels. This is the future, let's make it safe.
Coincidently, I just installed Fords upgrade kit for pick up trucks and now I have a higher steel bumper and more weight over the front tires. I'm lovin' it, because it's for the planet.

You didn't mention that this is another progressive program as it sets average mpg. The little people must drive little cars, but of course members of the ruling class still ride in limos and take his and her jets to Hawaii.

Anonymous #1 - Death of Americans is What Democrat (and RINO leftists) Do Best.

From crappy rules of engagement for military, to no guns to defend your home, to abortions, to ruining health care system, to toxic mercury curly light bulbs, to solar fields that fry birds and pollute whole chinese cities, to wind farms that slice and kill birds, to making people poor, jobless, homeless, turning cities into ghettos...
That's the Commie Obama Way.

But if it saves just one spotted owl or dolphin, isn't it worth it?