REIGN OF ERROR: Kathleen Sebelius a Poster-Child for the Disaster That is Obamacare

Health Overhaul: The midwife of ObamaCare exits stage left, leaving behind wreckage that once was the finest health care system in the world, less affordable health insurance and patients unable to find doctors and hospitals. 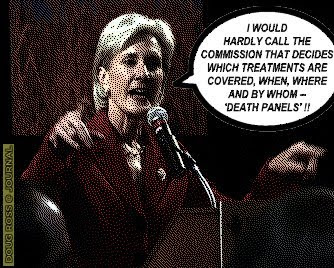 Kathleen Sebelius, the secretary of Health and Human Services — referred to in the increasingly un-Affordable Care Act's iconic use of the phrase "the Secretary shall determine," which appears in ObamaCare's guiding document no fewer than 1,005 times — has determined that it's time to go.

Or rather it's been determined for her by a White House in whose parallel universe ObamaCare's current alleged enrollment numbers represent an imagined triumph of a law illegally and unconstitutionally altered on the fly to meet number-goals she once denied having set and deadlines that became movable goal posts.

In fact, she had become the poster child for the ObamaCare disaster and, politically, had to go.

The correct answer was politics. It was bad enough that some 6 million people were already losing their insurance, including stage 4 cancer patients. To proceed with the business mandate would have produced a tidal wave of cancellations in advance of a critical election.

It was just one of some 37 politically motivated changes to the law that the president was not constitutionally authorized to make.

Sebelius was also shamelessly corrupt. She personally called privately-held companies regulated by HHS and "asked" them to contribute funding to a non-profit, Enroll America, set up to promote ObamaCare.

She had the distinction of being one of the few cabinet secretaries ever cited for a violation of the Hatch Act when she served as keynote speaker at a Human Rights Campaign event in Charlotte, N.C.

Sebelius, the cruise director on this medical Titanic, did not write ObamaCare.

But she and her minions did write the implementing regulations that have, among other things, shredded the First Amendment's guarantee of religious liberty and, in the name of helping those in need, have made war on the likes of the Little Sisters of the Poor.

The alleged purpose of ObamaCare was to insure the uninsured, but — as the Heritage Foundation notes — in 2024, after a decade of implementation and nearly $2 trillion in new spending, a projected 31 million Americans will still remain uninsured.

Then there was what Politifact dubbed the "Lie Of The Year," actually a compound lie by President Obama saying that you could keep your plan and your doctor while your family saved $2,500 annually in premiums.

In fact, premiums are skyrocketing, and deductibles as high as $10,000 prompted one cancer patient to take his chances rather than burden his family with debt.

Even if you have insurance, good luck keeping your doctor or finding a new one; doctors and hospitals leave or are left out of ObamaCare's restrictive networks.

One of what ObamaCare dubs "exclusive provider organizations" in Florida has seven pediatricians for a county with roughly 250,000 children.

Then there's the economic harm that ObamaCare is doing as companies stop hiring after reaching 49 employees or restrict them to 29 hours a week to avoid punitive ObamaCare costs.

Now the deck chairs are being rearranged, and the Titanic will have a new skipper.

To isolate Sebascus and say she's the poster child for 0Care's failure is like examining a predator's penis and saying it was the problem. The failure lies with the molester in chief. He can't even run a cattle raid successfully.

sebelius was even too stupid for lying obama to stomach....imagine dumb ass sebeluis was recorded saying 7 million was the sign up goal and then she said it was someone else 's goal not hers.. she was stupid to think American were going to believe her denials of ever claiming she never said it
obama and all the democrat bozos who voted in 2010 for the fraud obamacare should be defeated in 2014 elections
only washington establishment rinos and lobbyists want obamacare to stay