STRAIGHT OUT OF THE COMMUNIST MANIFESTO: The Obama Tax Code, Destroying Jobs and Opportunity

If I'm late with my taxes, will a claim of being an illegal alien undocumented Democrat get me off the hook? Just wondering.

As Americans navigated the labyrinthine tax code ahead of tax day, many felt the sting of the President’s myriad tax increases. 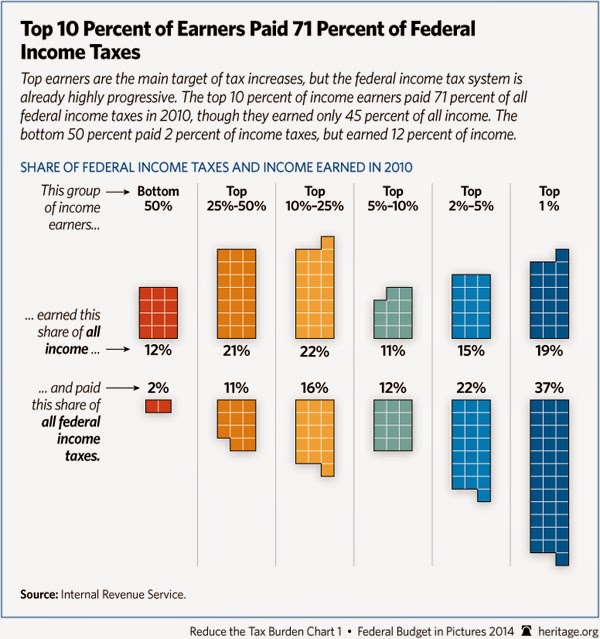 So when Obama and advocates of higher federal taxes opine that the rich do not pay their “fair share,” they are correct—affluent income-earners pay a whole lot more than they would pay if we had a proportional tax code instead of the highly progressive one we have today.

While taxes have increased for most taxpayers, the wealthy are—relative to the rest of the population—increasingly shouldering the federal tax burden. The Wall Street Journal’s John McKinnon notes that this burden has shifted largely as a result of the tax changes passed at the start of 2013 during the fiscal cliff debates. These changes include a “bump in the top ordinary income rate to 39.6% from 35%, a limit on itemized deductions and an increase in the top rate on investment income.”

But the tax misery is not limited only to the well-to-do. All taxpayers faced an average tax increase of 1.8 percent in 2013. Indeed, Heritage tax expert Curtis Dubay uncovered no less than 13 tax increases that kicked in at the beginning of the year, six of which came on the coattails of Obamacare. Taxpayers also face state and local tax burdens that remain high in much of the country, as well as the prospect of rising payroll taxes in the future.

In addition to stifling economic growth, many of these new taxes—especially those on income—penalize success and discourage work. As Dubay has written, it is imperative to reform the tax code because families would be able to earn more, “but would not pay higher marginal tax rates on their higher earnings. The tax code would not punish families as it does today for being more successful and for earning higher compensation because they are more productive.”

Most Americans are not aware that the "progressive" tax code was lifted right out of the Communist Manifesto by the Democrat Party.

It is meant to punish success, dampen investment, destroy jobs and opportunity, and -- in general -- make people more dependent upon the government.

And with this administration, those results are precisely what we're getting.