Over the years, the Left-wing Media Matters has taken it upon itself to criticize the “Right” for its opposition to unions’ attempt to effectively eliminate workers’ right to secret-ballot elections on whether or not to unionize. 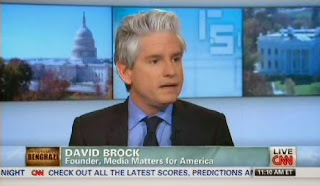 Due to its apparent penchant to having employers unionized based on “card check,” it would seem that Media Matters’ CEO David Brock would be against forcing his workers to go through the arduous process of actually voting for the Service Employees International Union, rather than merely accepting the SEIU without an election.

Nevertheless, despite Media Matters’ prior defense of the SEIU. it appears that Brock & Co. are not voluntarily recognizing the union based on card check.

On April 10th, the SEIU filed an election with the Baltimore region of the National Labor Relations Board to have an election for 50 employees working for the George Soros-funded media “monitor.”

According to the National Labor Relations Board’s website, Media Matters has hired the high-priced, management-side law firm of Perkins Coie.

Although former Obama White House Counsel Bob Bauer is a partner in the firm, Perkins Coie’s website boasts of helping employers in all aspects of traditional labor law:

…As the Obama NLRB continues to issue union-friendly decisions, we understand the attendant challenges that employers face in developing and maintaining productive employee relations and economic sustainability.

While a NLRB-conducted election is likely weeks away, several questions emerge:

Only time will tell before we know the answers to any of these questions.